It was less successful, however, with some other innovations, especially considering how popular the technologies became when adopted by others.

Xerox developed an early computer that offered a mouse and graphic screen that allowed the user to navigate across the face of a monitor instead of typing on a keyboard — the very technology used by just about everybody using Apple or Microsoft software today. 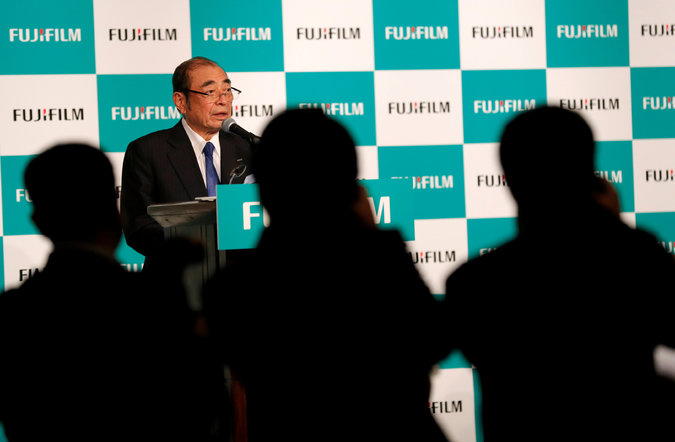 Shigetaka Komori, chairman and chief executive officer of Fujifilm, at a news conference in Tokyo on Wednesday.

But the company was not able to turn those innovations into commercial successes. Xerox fought Apple in court after the computer company enjoyed tremendous popularity with its Macintosh computers, which used similar technology.

Under the deal announced on Wednesday, Xerox, of Norwalk, Conn., will become part of the Fuji Xerox joint venture, which sells office products and services in the Asia-Pacific region. As part of the deal, it will issue a combined $2.5 billion in cash dividends to its shareholders.

The combined company would have $18 billion in annual revenue and would continue to trade on the New York Stock Exchange under Xerox’s ticker symbol, XRX.

“I am confident that Fujifilm’s ability to drive change as well as its experience of successful reinvention will give a competitive edge to the new Fuji Xerox, delivering significant value creation to shareholders of both the new Fuji Xerox and Fujifilm,” Shigetaka Komori, chairman and chief executive officer of Fujifilm, said in a written statement.

Xerox’s shares, which have traded in a steady range in recent years despite a broad run-up in the stock market, rose about 12 percent over the past month in anticipation of a deal.