Things are different in the elite universities in America. Harvard’s current freshman class, for instance, is just under 50 percent female, while Stanford’s is 51 percent female.

Thomas A. DiPrete, the Giddings professor of sociology at Columbia University and co-author of “The Rise of Women” on the gender gap in education, said that elite institutions maintain a closer gender balance because they get so many highly qualified applicants that they can select students with the aim of achieving a well-rounded class.

It is among students from lower-socioeconomic status backgrounds that the ratio of women and men earning college degrees has changed most dramatically in recent decades, Dr. DiPrete said. In the mid-20th century, he said, “the biggest gender gap in favor of the boys was among the less educated. It was the college educated parents where the gap was small. And that flipped.”

Education experts welcomed the news about Oxford. “It is a significant moment,” said Nick Hillman, a former government adviser and director of the Higher Education Policy Institute. “We don’t know if this is a trend, but it probably is part of one,” he said, adding that results showed girls progressively outperforming boys throughout the education system. 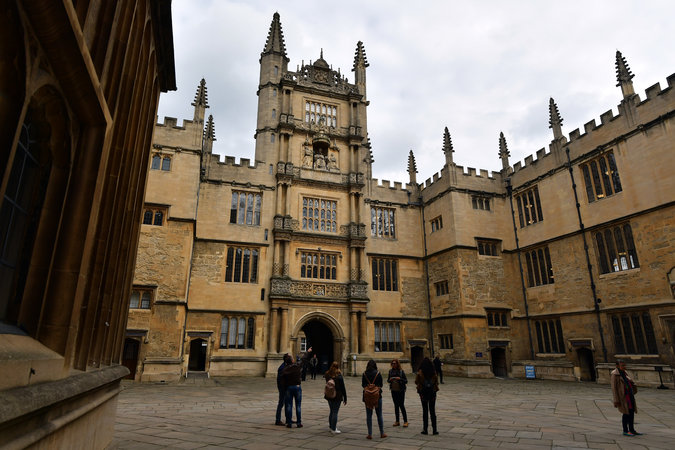 The Bodleian Library at Oxford. One analyst suggested that Oxford’s interview process may have skewed admissions in the past.

Sam Smethers, chief executive of the Fawcett Society, a leading gender-equality charity, also hailed the announcement, but said it was only a step in a longer process.

“It is good to see this progress at Oxford, but what matters is which subjects they are studying and what happens when they leave,” she said. “We know that women are still underrepresented in math, science and engineering subjects, and that female graduates experience a pay gap on entering the workplace.”

Oxford and Cambridge have faced persistent criticism for favoring graduates of Britain’s elite “public schools,” expensive private boarding schools like Eton and Harrow. In 2015 nearly one in three Oxford colleges failed to admit a single black British high school graduate, according to David Lammy, a lawmaker for the opposition Labour Party who accused the university of “social apartheid” over its admissions policies.

Oriel College, Oxford, was at the center of highly charged protests from students who campaigned, unsuccessfully, for the removal of a statue of Cecil Rhodes, an imperialist benefactor seen by many as an architect of apartheid. Some black students likened the memorial to erecting a statue of Hitler.

Oxford University itself gave the enrollment news a cautious welcome, saying in a statement that it “can’t say for certain whether this is the first time in history that Oxford has let in more women than men.

“And while it’s too early to call this a trend based on one year’s numbers, it is a welcome sign of progress for female applicants to Oxford,” the statement said.

Officials at Oxford say they are unsure why women have been underrepresented, though Mr. Hillman said that an involved interview procedure may skew the admissions process. After students are evaluated based on grades, predicted examination results and sometimes tests, those making the cut are interviewed by their prospective tutors, who make the final decisions on admittance.

“Everybody thinks they are being totally fair and are choosing on potential,” Mr. Hillman said of the interviews, “but all the evidence is of unconscious bias — that we choose people who look and think like us.”

The changing numbers may therefore also reflect the growing proportion of female academics.

The first woman to be appointed to a full professorship at Oxford was Agnes Headlam-Morley, who became Montague Burton professor of international relations in October 1948. In 2016 another milestone was passed when Louise Richardson became the university’s first female vice chancellor.

Oxford describes itself as the “oldest university in the English-speaking world,” and on its website says “there is no clear date of foundation, but teaching existed at Oxford in some form in 1096 and developed rapidly from 1167, when Henry II banned English students from attending the University of Paris.”

Academic halls for women were established in 1878, but it was not until 1920 that women were allowed full membership at Oxford, allowing them to graduate. Five of its all-male colleges admitted women in 1974, with all eventually admitting both women and men.