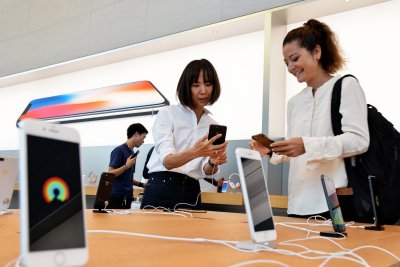 May 15 (UPI) — Leading electronics manufacturers in Japan and Taiwan are facing a crisis because of U.S. President Donald Trump‘s decision to possibly place 25 percent tariffs on another $300 billion worth of “Chinese” goods, according to a Japanese press report.

The Nikkei reported Wednesday the tariffs would hit 3,805 items, including key consumer products like smartphones. Top Japanese, Taiwanese and South Korean mobile phone manufacturers with plants in China could be heavily hit with tariffs, according to the report.

Terry Guo, chief executive of Foxconn in Taiwan, has said the firm is reviewing its options because “no end appears to be in sight” in the U.S.-China trade war.

Foxconn, a major manufacturer for companies like Apple, has 12 factories in nine Chinese cities and hires more than a million employees on the mainland.

Taiwanese manufacturer Compal Electronics, maker of the latest iPads for Apple, is also exploring relocation options. The company could move operations to Vietnam, according to the Nikkei.

Asus, the Taiwan-based multinational computer and electronics company, has maintained a long-term presence in China. The company is also not ruling out relocation despite plants that began operations in China in the 1990s.

Other firms in Taiwan, like Quanta Computer, may not be able to relocate owing to high costs associated with relocation and negotiations.

Nitto Denko, a Japanese company that produces tapes, vinyl and LCDs for firms like Samsung Electronics and Apple, is expected to decrease production in response to the tariffs on smartphone-related products, the Nikkei reported.

The tariffs targeting China are hurting third-party manufacturers in an interdependent global economy at a time when China’s economy is showing signs of slowing.

CNBC reported Wednesday China, as well as the United States, are reporting weaker retail sales and industrial production for April, even before the latest escalation.