Vice President Mike Pence, an evangelical Christian, visits Israel this week, the culmination of his years of support for the country on religious grounds. But the Trump administration’s policies, while lauded by American evangelical groups, are opposed by Palestinian Christians and have been questioned by Pope Francis.

Those policies, in other words, align poorly with either the religious solidarity or foreign policy realism that supposedly animated them, but align perfectly with American identity politics.

Mr. Trump, with his penchant for indulging his nationalist impulses and disregarding foreign policy doctrine, is a perfect vessel for carrying that culture war abroad, with potentially far-reaching consequences. 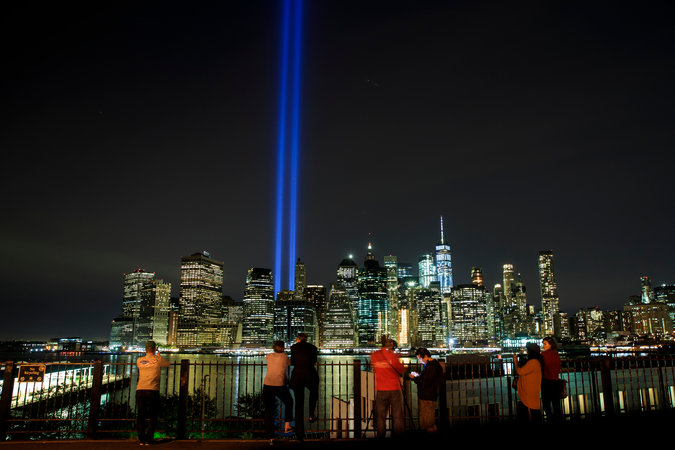 The Tribute in Light rising above the skyline of Lower Manhattan on the 16th anniversary of the Sept. 11 attacks. The attacks divided Americans over issues of terrorism, torture, and inclusion, particularly of Muslims.

How a Mideast Conflict Divided Americans

Americans, more polarized than at perhaps any other point in their modern history, tend to be less divided on foreign policy. But they split on Israel as if it were a domestic issue, suggesting that, whether they realize it or not, they experience it as such.

Asked whether they sympathize more with Israelis or Palestinians, Republicans answer the former nearly seven to one, according to a Pew survey. Democrats sympathize with the groups about equally. Within the parties, conservatives tilt more pro-Israeli.

That partisan gap is at it widest since Pew began asking the question in 1978. And it applies to nearly any policy question related to Israelis and Palestinians, suggesting that Americans derive their views by identifying with one side over the other.

Picking sides has long been taboo in American policy, with presidents asserting that the United States must remain neutral in order to negotiate peace. Mr. Trump, breaking with this practice, answers a major conservative demand.

But this demand is relatively new. Its origins goes a long way to explaining Mr. Trump’s actions on Israel — and how they fit within his instincts for stoking American divisions.

When evangelical Christians organized as a political bloc in the 1980s, they made Israel a priority. Some interpreted the Bible as asserting Israel’s right to control the Palestinian territories. In the 1990s, as Democrats pushed for social changes, evangelicals sorted into the Republican Party.

“Israel isn’t an ‘issue’ for evangelicals in the same way that deregulation and a better tax policy are issues,” Robert Nicholson, who leads a Christian advocacy group, said in an email. “It is a matter of identity.”

While this bolstered Republicans’ pro-Israel attitudes, the parties did not polarize on the issue. Many evangelicals expressed their support as a matter of spiritual kinship rather than prevailing over Palestinians. After all, a number of Palestinians are Christian themselves. And Mr. Trump, though popular with evangelicals, is hardly one himself.

Research by Amnon Cavari, an Israeli political scientist, found that hard-line views on Israel had spread among conservatives only recently, and largely because of partisan polarization over domestic issues. Though conventional wisdom often suggests that evangelical and Jewish groups energized conservative views on Israel, in fact it was the other way around.

That began with the attacks of Sept. 11, 2001, which divided Americans over issues of terrorism, torture and inclusion, particularly of Muslims.

This became the basis of a culture war that, largely by chance, aligned almost perfectly with a real conflict just then unfolding between Israelis and Palestinians.

A period of terrible violence known as the second intifada — in which Palestinian militants staged shocking terrorist attacks and Israeli military actions killed scores of civilians — resonated with Americans. Israeli leaders, seeking Washington’s support, encouraged Americans to see their conflicts as one and the same.

Being tough on terrorism became a core conservative value that was expressed, in part, as support for Israel — specifically, as support for harsh Israeli policies toward the conflict. This also aligned with increasingly negative attitudes toward Muslims. And an atmosphere of us-versus-them politics equated supporting Israelis with opposing Palestinians.

Though George W. Bush, then the president, encouraged both inclusion of Muslims and neutrality on Israel, polarization pulled some conservatives toward a zero-sum view of the conflict, in which maximally opposing Palestinians became a matter of identity.

This opened a gap between the identity politics of the Republican base and the policies of its leaders — precisely the sort of gap that Mr. Trump would exploit in his presidential primary bid. As he rose by saying what others would not, he supercharged the Israeli-Palestinian conflict’s salience to identity issues among what would become his base.

Mr. Trump advocated severe restrictions on legal and illegal immigration, particularly from Muslim-majority countries whose citizens he said posed a threat. In doing so, the president aligned fear of demographic change with fear of terrorism.

There is no reason that those positions must necessarily line up with support for Israel, but Mr. Trump leveraged culture war passions to try to bring them together.

“Horrible killing of a 13 year old American girl at her home in Israel by a Palestinian terrorist.” Mr. Trump tweeted in 2016, adding, in a line that became his slogan for a travel ban on people from several majority-Muslim countries, “We must get tough.”

Mr. Trump also exploited polarization over Israel to rally supporters against Barack Obama, whom he repeatedly suggested was foreign-born, Muslim and suspiciously hostile toward Israel.

“Is President Obama trying to destroy Israel with all his bad moves?” Mr. Trump asked on Twitter, also in 2016. “Think about it and let me know!”

In office, this is one of a handful of issues, along with sharply curtailing legal immigration, on which Mr. Trump has taken concerted, unilateral action. He is now pressing to move the United States Embassy from Tel Aviv to Jerusalem as early as next year.

These policies meet rising conservative demands that the United States abandon its traditional neutrality on the Israeli-Palestinian conflict, and instead side overtly with Israel.

While some say pro-Israel groups are responsible for this shift, Mr. Trump, who has had an icy relationship with those groups, in fact appears to be following the Republican base. In 2014, 51 percent of Republicans said the United States should lean toward Israel in peace talks. That number has since grown to 58 percent.

Mr. Trump represents the culmination of a trend that pro-Israel groups resisted for years: the loss of Jewish support. Even as Jews grew more liberal, many supported strongly pro-Israel policies. But as “pro-Israel” becomes synonymous with “conservative Republican,” Jews are drifting away. They oppose moving the embassy by almost 3-to-1.

Party politics started this process. In 2015, Republicans invited Benjamin Netanyahu, Israel’s right-wing prime minister, to address Congress in opposition to Mr. Obama’s policies on Iran. Though intended to turn American Jews and others against Mr. Obama, it had the opposite effect, polarizing them against Mr. Netanyahu.

Mr. Trump has taken it drastically further. He has indulged hard-core conservative instincts to a degree that, deliberately or not, attracted support from a white nationalist fringe that also tends to be hostile to Jews.

He is moving the idea of being “pro-Israel” even further right, separating it even from the Jewish support that is ostensibly critical to Israel’s long-term survival.

Revoking aid from refugees to punish Palestinian leaders, for instance, aligns with Mr. Trump’s nationalist tendencies to treat foreign populations as monolithic blocs. This, too, has its roots in American culture wars over immigration.

Like his immigration restrictions, Mr. Trump’s Israel policies can be unpopular outside his base. A December poll by the Brookings Institution found that only 31 percent of Americans support moving the embassy. But the base has shown itself often able to overwhelm party leadership.

Mr. Pence’s religiosity may embody the old mode of American support for Israel, driven by groups with strong views on the conflict itself. That still exists, but is increasingly subsumed by a broader, blunter worldview that treats the Israeli-Palestinian issue as an extension of another conflict that can seem just as intractable: American partisanship.