Bitter squabbles with city authorities over the additional security measures — and who would foot the bill — had also delayed the opening for weeks, causing some vendors who had snapped up some of the 50-odd licenses available to opt out.

Even though the sun was shining, Paolo Padovani, whose crèche figurine kiosk has been a Piazza Navona staple since 1926, was gloomy.

Usually, the market opens at the beginning of December. This year, the stands were not up and running until Dec. 19, “when most people have already put up their nativity scenes,” he said. Sales plummeted, he said, because “people got fed up with waiting.”

Donato Colangelo, a greeter at one of the restaurants that line the graceful square, said this past week: “It’s a sad sight. The market at Piazza Navona was known throughout the world.” 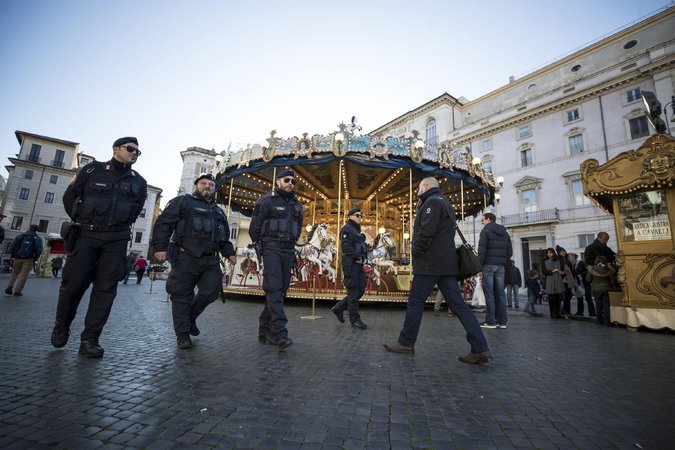 Among the signs of that change are the ubiquitous law enforcement officers occupying the square. After terrorist attacks in European cities like Nice, France, and an assault on the Christmas market in Berlin in 2016, security was increased throughout Italy over the holidays, especially in high-risk areas and at attractions that regularly draw crowds.

At Piazza Navona, in addition to the checks at the square’s entrances, army trucks were parked at strategic points and dozens of officers strolled among civilian visitors. But the tight security was not daunting to some Roman families making the annual pilgrimage.

Alessio De Gregori, an optician, said he had not thought twice about going with his family, including two small children in strollers.

“Nowadays, security measures are everywhere,” he said on Saturday, adding that he believed Rome was immune from a terrorist attack.

“We are lucky,” he said. “As long as we have this pope, nothing will happen. At least, I hope so.”

The Christian feast of the Epiphany celebrates the visit of the Magi to the baby Jesus, but in Italy, the Befana tradition grew out of ancient pagan rituals and it has been celebrated in one form or another for centuries.

On Friday, the farmers’ association Coldiretti estimated that 45 percent of all households in the country hung up a Befana stocking. That happens, the association said in a statement, even among those who do not celebrate the holiday, or who do not have children at home.

But the holiday spirit is especially heartfelt in the capital. Rome’s native bard, Giuseppe Gioachino Belli, composed odes to the Befana in the 19th century. The composer and violinist Ottorino Respighi titled the fourth movement of his 1928 “Feste Romane” “La Befana,” capturing the cacophonous market.

That reverence and enthusiasm seem more suited to the distance past.

The holiday was abolished by Parliament in 1977, along with other religious holidays, but it was later reinstated. Now, the Piazza Navona tradition “is dead,” declared Sergio Balestrini, whose association has organized an annual Epiphany parade at the Vatican since 1986 to celebrate the reinstatement of the holiday.

“If we speak of tradition in cultural terms, it’s gone,” Mr. Balestrini said. “It’s become unrecognizable; we used to go to eat seasonal sweets and see the Befana. Now the important thing is to sell.”

Some critics compared the situation at Piazza Navona to Rome’s Christmas tree, which was nicknamed “Spelacchio,” or mangy, because of its sad, spindly appearance. The tree, mocked on social media, has since become a cybersensation, and city officials are expected to decide on its future on Monday.

The Italian news media have reported that the tree, in Piazza Venezia, could be consigned to the national contemporary art museum, or transformed into a wooden hut for women to nurse their babies, most likely not in the piazza.

Previous city administrations had raised the alarm about problems with the Befana market. In 2014, it did not open because of the dwindling quality of the market and its products, as well as questions about the kiosk concessions. Critics claimed some vendors had been given a monopoly.

Cultural events were substituted for the commercial kiosks, but Romans agreed that they just weren’t the same.

“Rome always had a feast of the Befana; we didn’t have Santa Claus growing up. That came later,” said Sabrina Alfonsi, the Democratic Party president of Rome’s first municipality since 2013. Ms. Alfonsi tried to “requalify the market” by opening up the criteria for the kiosk licenses, but she was unsuccessful.

Complaints these days have mostly been directed at the city’s Five Star Movement government, which, critics say, has been unable to give the market the shake-up it sorely needs.

When city officials decided to reboot the market this year, they decreased the number of kiosks by half “to make room for games and recreational activities for children and respond to the true spirit of this event,” according to city documents.

The trouble is, there are few child-friendly recreational activities in the square this year, save for a puppet theater with hourly shows, three stands with knock-down carnival games and a 19th-century German carousel, a market mainstay.

When Viviana Piccirilli Di Capua was a child, an indefinite number of decades ago, her parents would take her to Piazza Navona on the eve of Epiphany to stroll through the kiosks.

“It was such a thrill, but we had to rush home before 9 o’clock, because if the Befana didn’t find you in bed when she passed by your home, you wouldn’t get presents,” she recalled.

“Over the years, the market has been ruined, losing its beauty, décor and attention to the products,” said Ms. Piccirilli, who is the president of an association of residents of Rome’s historical center who has lobbied to gentrify the market. “We were hoping to bring back artisanal goods and tradition, but it hasn’t happened,” she said.

“My beloved Rome has lost the ability to transmit it’s beauty; why do we always show something inferior to the possibilities that this city has,” Ms. Piccirilli said. “Above all, this is a feast for children, but the only joyous thing is the merry-go-round.”