Otherwise, North Korea made a surprisingly conciliatory gesture during the talks, promising to send a delegation of athletes, cheerleaders and journalists to the Winter Olympics being held next month in the South Korean town of Pyeongchang. The North also agreed to more talks with the South, including a dialogue between their militaries, to ease tensions and improve ties.

This week’s talks, in the border village of Panmunjom, were the first governmental dialogue between the Koreas in more than two years, and the agreements they produced were hailed as a welcome reprieve for South Koreans after a year of talk of war over the North’s nuclear and long-range missile programs.

But they also came amid concern that Mr. Moon might end up facilitating Mr. Kim’s strategy of fracturing the American-led sanctions campaign and driving a wedge between Seoul and Washington. 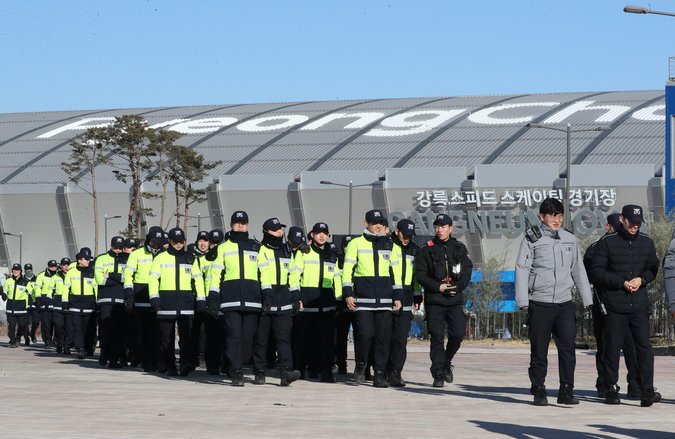 Police officers on Wednesday outside the venue where speed-skating events at the Winter Olympics are to be held. In a conciliatory gesture this week, North Korea promised to send a delegation to the Games in Pyeongchang, South Korea.

Addressing such concerns, Mr. Moon said there was a limit to how far the two Koreas could go in improving ties if North Korea did not move toward dismantling its nuclear weapons program.

”The two issues — improving inter-Korean relations and resolving the North Korean nuclear issue — cannot be separated,” Mr. Moon said. “If the North provokes again or does not show sincerity on revising its nuclear problem, the international community will continue to apply even stronger sanctions and pressure.”

“My government has no intention of easing sanctions unilaterally,” he added, dismissing speculation that he might lift some of the sanctions imposed by his conservative predecessors, like the closing of a joint factory park in the North Korean town of Kaesong.

But Mr. Moon, a vocal critic of Washington’s plan to use military force to resolve the North’s nuclear threat, reiterated that the ultimate goal of sanctions and pressure must be to force North Korea to negotiate. He emphasized that his top national security and foreign policy goal was to prevent war on the Korean Peninsula.

Since he took office last May, Mr. Moon has faced detractors at home, especially older and conservative South Koreans who fear he may concede too much to the North as he doggedly champions talks. Such concerns have persisted even as Mr. Moon has moved to build more powerful missiles and get new weapons from the United States to counter the North’s nuclear threat.

Conservative South Koreans, as well as American policymakers, remain deeply skeptical of Mr. Kim, the North Korean leader, who has accelerated the pace of nuclear and missile tests since taking power six years ago.

In a New Year’s Day speech, Mr. Kim proposed dialogue with the South to discuss his country’s participation in the Pyeongchang Olympics, which Mr. Moon has called for repeatedly. But he wants North Korea to be accepted as a nuclear weapons state, even boasting in his speech that he now had a “button” in his office to launch nuclear missiles at the mainland United States. At the same time, he urged Koreans on both sides to work together for peace.

During the border talks on Tuesday, the North’s top negotiator, Ri Son-kwon, categorically rejected the South’s attempt to discuss the nuclear issue, calling it “absurd” and warning that it could derail efforts to improve inter-Korean relations. He said North Korea’s nuclear weapons were not built to attack South Koreans, Chinese or Russians, but were “aimed solely at the United States.”

For decades, North Korea has refused to discuss its nuclear weapons program with the South, insisting that it is an issue to be addressed only by it and the United States.