This jockeying for power is expected to offer all the drama that next year’s presidential race sorely lacks. Cloistered, for now, mostly behind the Kremlin walls, the intrigues are expected to burst into public view with increasing frequency in coming years.

Several internal battles have already erupted publicly, including the dismantling of a respected research university and a startling corruption trial in which a former minister accused of soliciting bribes said he was set up by a former spy who has been a close Putin ally. It is the kind of fight the president would have managed privately in previous years. 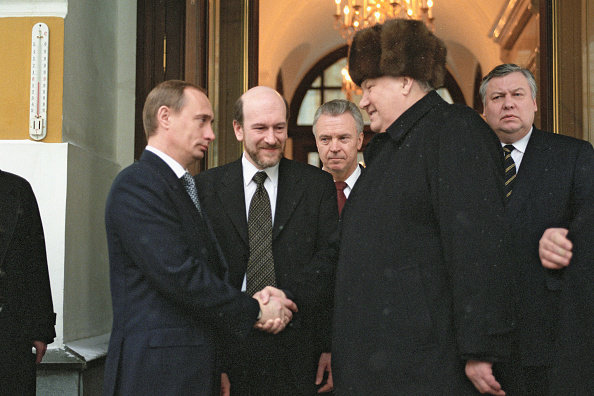 The departing Russian president Boris N. Yeltsin, right, shaking hands with Mr. Putin, who succeeded him, at the Kremlin on Dec. 31, 1999.

“You cannot hide the enormous tension, the enormous degree of uncertainty within the Russian elite,” said Konstantin Gaaze, who contributes political analysis to the website of the Carnegie Moscow Center, a policy research organization. “They will do stupid things; they will blackmail each other; they will write reports about each other and bring them to Putin.”

For the coming three months, the election will be the main distraction. Then Mr. Putin, who will turn 72 in 2024, is expected to start building something of a retirement plan.

In the view of some analysts, the president believes that trying to retain the job for life would be a mistake. One day, if he stays too long, he could be hastily deposed — like the recent experience of President Robert Mugabe in Zimbabwe after 37 years in office.

“Putin thinks of himself as an historical figure, and he knows that if he wants to put himself into the history books, he should not repeat Mugabe’s mistake — he should find the right time to leave,” said Konstantin Kalachyov, the head of the Political Expert Group and an occasional consultant for the Kremlin.

At the same time, Mr. Putin is likely to want to preserve some political role after 2024 and not simply retire to his dacha, or worse, end up in jail.

“He cannot just go,” Mr. Gaaze said. “He knows perfectly well that if his successor fails, they will both be prosecuted.”

Some expect Mr. Putin to reshape the Constitution to create some kind of higher military or security council, appointing himself to lead it and securing his influence. “I cannot imagine a situation where he gives all power to the successor; he does not trust anybody,” Mr. Gaaze said.

Mr. Putin has done something similar before. When his second consecutive term as president ended in 2008, he served as prime minister during the one-term presidency of Dmitri A. Medvedev, although it was understood he remained the country’s ultimate leader. Starting with the election of 2012, the president’s term in office was extended from four years to six.

Mr. Pavlovsky, who worked in the Kremlin under President Boris N. Yeltsin, recalled that the process to replace Mr. Yeltsin, who was ailing, began right after he won the 1996 election and would clearly not run again.

It meant rebuilding the state, not just replacing the man.

“We knew that Yeltsin would be gone in 2000, and we did not want the state to go with him,” Mr. Pavlovsky said. “It was Yeltsin’s Russia. Yeltsin was going, so Yeltsin’s Russia was going too, and we had to found a new Russia.”

Mr. Yeltsin appointed Mr. Putin his successor in 2000, and he has been the most powerful man in Russia ever since. Because Mr. Putin has centralized so much power, the question of who will succeed him is especially urgent.

So the various factions within the Putin Court will seek to convince the president to name an heir apparent who best preserves their collective interests.

For those angling to succeed the president, it is a high-wire act. Candidates need to be careful not to be seen as an immediate threat to the president, notoriously protective of his position. Push too hard, too fast, and a person could be purged.

And as 2024 nears, Mr. Putin’s ability to protect likely successors could lessen, putting them at risk of being brought down by rivals. As a result, no one is expected to seek the heir apparent title openly.

“People considered possible successors are ready to pay not to be called that,” Mr. Kalachyov said.

The Kremlin dismissed talk of internal intrigues, with Dmitri S. Peskov, Mr. Putin’s spokesman, calling such speculation the favorite pastime of political analysts. “That is what they do,” he said.

There have already been signs of Mr. Putin’s influence starting to ebb, however, and a few brutish spats among the elite have spilled into the open.

Russia’s former economy minister, Aleksei V. Ulyukayev, delivered a long, emotional soliloquy at the closing of his corruption trial on Thursday about what he views as political treachery.

He faces up to 10 years in a penal colony on charges of soliciting a $2 million bribe to approve a major oil deal sought by the state oil giant Rosneft, run by Igor I. Sechin, a Putin ally and former military intelligence agent.

Mr. Ulyukayev pleaded not guilty, accusing Mr. Sechin of setting up a cloak-and-dagger sting operation by proffering a gift of fine wine and homemade sausages to disguise a brown leather satchel brimming with dollars.

In his speech, the former minister warned the Kremlin elite that anyone could be next in the docket. “Never send to know for whom the bell tolls, it tolls for thee,” he said, quoting the classic lines of John Donne. “It can toll for any one of you. It’s become very easy: a bag, a basket, a grainy video, three clicks, and it’s ready.”

In a show of force, Mr. Sechin refused a court summons to appear as a witness at the trial four times, saying he was too busy.

Aside from Mr. Ulyukayev, Mr. Sechin appears intent on crushing Sistema, a wealthy investment firm, by filing repeated lawsuits — despite public admonitions from Mr. Putin that he would like such disputes settled amicably.

Mr. Sechin also publicly, and unexpectedly, pledged to work with Ramzan Kadyrov, the autocratic leader of Chechnya. Both men have shown an increasing tendency to act independently of Mr. Putin, distancing themselves even though it was the president’s protection that allowed both to become outsize figures with vast fortunes and personal fiefs.

If Mr. Sechin and Mr. Kadyrov share a common cause, it is trying to help choose the next president, the best insurance for those in the inner circle. “Because the others, except those who decide the successor to Putin, will all be in great danger,” Mr. Pavlovsky said.

The more Mr. Putin becomes a lame duck, analysts said, the less influence he may have in choosing a successor and the more Kremlin insiders will assert themselves. Many point to the case of the European University at St. Petersburg as an example that Mr. Putin’s protection is no longer as robust.

First the university lost its building, and last week it was denied an operating license for the third time. The demise came despite what one senior university official and various Russian news reports described as three attempts by Mr. Putin to get the Education Ministry to protect the place.

“What matters now is your own potential independent of Putin,” Mr. Pavlovsky said, “because the moment is rapidly approaching when Putin will not be able to help you.”