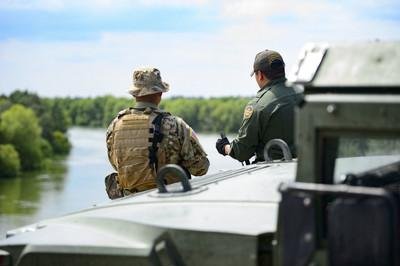 July 18 (UPI) — An additional 2,100 troops, including 1,100 active-duty service members and 1,000 Texas National Guard soldiers, will be deployed to the U.S.-Mexico border “in the next several weeks,” the Pentagon announced.

Acting Defense Secretary Richard Spencer, who took responsibility of the Defense Department on Tuesday, authorized the additional personnel Wednesday. Spencer has been the Navy secretary since August 2017.

Already at the border are about 2,500 active-duty and 2,000 National Guard troops.

Members of the Texas Guardsmen will assist CBP with with intake and detention of migrants.

The additional active-duty forces are necessary because of “shortfall in volunteer National Guard personnel,” Mitchell said.

In June, Texas Gov. Greg Abbott announced the impending mobilization of the additional Texas National Guard troops to help establish holding facilities in the Rio Grande Valley and El Paso for single adults entering the country illegally. The mission will be federally funded and under the control of the governor.

And earlier this month, the Department of Homeland Security formally sent a request to the Pentagon for extra National Guard troops.

Civilian law enforcement will continue to supervise the migrants and the military troops will assist at the holding camps, officials said.

The 1,000 Guard breakdown includes about 250 additional personnel at ports of entry and airports in Texas and the other 750 to help Customs and Border Protection staff at two “temporary adult migrant holding facilities” in Donna or Tornillo in Texas, Mitchell said.

“Decisions regarding arming military personnel and related rules for the use of force will be informed by the circumstances of their mission and be made by the governor of Texas, in consultation with CBP,” Mitchell said.

Army Secretary Mark Esper, who has been nominated as the next defense secretary, spoke about military support at the border during a Senate Armed Services Committee confirmation hearing Tuesday.