The Kosovo government condemned the killing, which it said “challenges the rule of law and any attempt to establish order throughout the entire territory of Kosovo.”

In a statement, Hashim Thaci, president of Kosovo, said, “I call on the law enforcement authorities to expose the circumstances of his assassination as soon as possible and the perpetrators of the crime come to justice.”

In Brussels, after the assassination, a Serb delegation walked out of talks on Tuesday on normalizing relations between Kosovo and Serbia. The European Union has served as a mediator as both Serbia and Kosovo see to join the 28-nation bloc. But recognizing Kosovo’s independence is a condition for Serbia’s membership in the bloc.

Serbia considers Kosovo the cradle of the Serbian nation and of its Christian Orthodox faith and refuses to recognize its former province as an independent state, a stance backed by Russia. 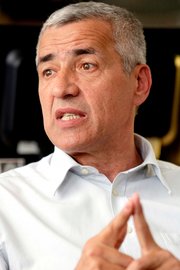 Serbia had ruled the predominantly ethnic Albanian province since the late 1980s, when its former strongman, Slobodan Milosevic, revoked Kosovo’s autonomy. Serb forces were driven out in 1999, after an American-led NATO bombing campaign. Kosovo declared independence in February 2008, with the overwhelming backing of Western countries like the United States and most members of the European Union.

However, the ethnic Albanian-dominated government in the capital, Pristina, has failed to bring under its control the predominantly Serb parts of the country north of the Ibar River, including Mitrovica. The city is divided by the Ibar, with Albanians in the southern part and Serbs in the north, where Mr. Ivanovic was killed. When the war ended, NATO troops under French command allowed the city to be partitioned at the river, with the Serbs controlling the northern sector and maintaining close ties to Belgrade.

Mr. Ivanovic had no shortage of enemies, and someone set fire to his car outside his house in July 2017, after which some of his allies urged him to leave the country. In addition to being at the center of political tensions, he was an outspoken critic of Kosovo’s drug gangs and the authorities who he said allowed traffickers to operate with impunity.

His is one of several ethnic Serb parties in Kosovo, but unlike its major rivals, it is less subservient to Belgrade, and willing to recognize and work with the ethnic Albanian authorities. Under a previous administration in Belgrade, he served as chief of Serbia’s Ministry for Kosovo.

“He had a small party but a huge reputation,” said Dusan Reljic, a southeast Europe specialist at German Institute for International Affairs and Security, who knew Mr. Ivanovic. “If you were looking for someone who could build bridges, it would be him, which is why neither the government in Pristina nor the government in Belgrade liked him.”

A doctor who treated Mr. Ivanovic said he had been shot five times in the upper body. The police responded by blockading the Serb-majority northern part of the city as they searched for the gunman.

In 2014, a special European Union court set up to deal with Kosovo charged Mr. Ivanovic with involvement in the expulsion and killing of Albanian civilians. He was convicted in 2016 on one count, but an appeals court overturned that verdict last year and ordered a new trial.

International representatives in Kosovo condemned the killing on Tuesday, and called for a full investigation.

Tensions have escalated in Kosovo as the nation of 1.8 million prepares to celebrate the 10th anniversary of its statehood. Last week, the State Department warned Americans to exercise caution if traveling to the country, citing an increased threat of terrorism, particularly in Serb-dominated enclaves, including northern Mitrovica.

Mr. Ivanovic, who was married and had three children, was one of the main leaders of the Serbs in northern Mitrovica but later came to support better relations with ethnic Albanians, including the government in Pristina.

Marko Duric, the director of Serbia’s Ministry for Kosovo, said that whoever killed Mr. Ivanovic had aimed to destabilize the region. “The goal is to provoke chaos and to push Serbs in Kosovo and Serbia into the hell of fighting,” he told reporters in Brussels.