The development came after Mr. Ri opened the talks by throwing a curveball: He suggested that the talks be open to reporters. That way, he said, the people in both Koreas would be able to witness the North’s sincerity about improving ties.

But, wary of North Korea’s mastery of propaganda, Mr. Cho agreed to open only parts of the talks to pool reporters. 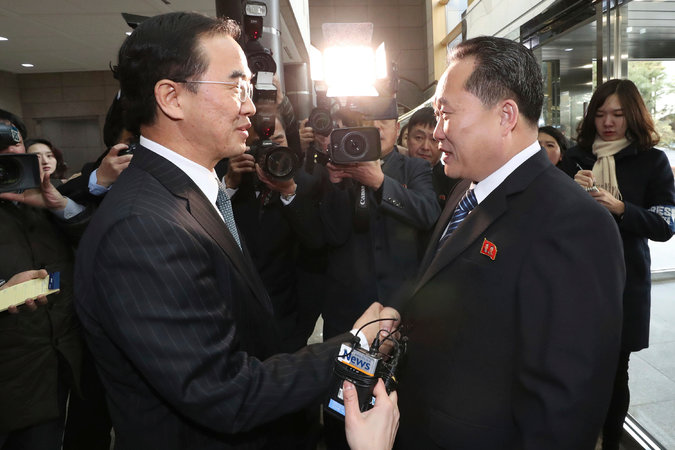 South Korea’s unification minister, Cho Myoung-gyon, left, with Mr. Ri before the start of their talks.

The closed-circuit television footage of the talks at Panmunjom, in the middle of the world’s most dangerous border, was relayed in real time to Seoul, where officials scrutinized North Korean tactics. The North transmitted the audio of the meeting to its capital, Pyongyang.

While the focus of Tuesday’s talks was the Olympics, South Korean officials were also expected to explore whether North Korea is interested in talks with the United States to ease tensions over its nuclear arms programs.

In his New Year’s Day speech, Kim Jong-un, the leader of North Korea, proposed holding the dialogue with South Korea to discuss his country’s participation in the Pyeongchang Games. In the same speech, he also claimed to have acquired a nuclear deterrent, including intercontinental ballistic missiles that he said he could unleash on the United States with his “nuclear button.”

Some analysts said Mr. Kim was hoping to use his country’s self-proclaimed status as a nuclear weapons state as leverage to win concessions from Washington, particularly the easing of increasingly crippling sanctions. President Trump and Secretary of State Rex W. Tillerson said that Mr. Kim’s decision to start dialogue with South Korea was a sign that their campaign to isolate the North was working.

The talks at Panmunjom provide an opportunity to gauge whether North Korea is willing to moderate its behavior after a year of provocative nuclear and missile tests that have raised fears of all-out war on the Korean Peninsula.

But the initial focus was on the Olympics.

South Korean officials must still nail down the travel route, lodging and other logistics of a North Korean Olympic delegation.

North Korea has traditionally sent only a small delegation to the Winter Games and has never won a gold medal at them.

The International Olympic Committee is eager for the North to return, promising to help cover its athletes’ expenses in Pyeongchang.

The only North Korean athletes to qualify for the Pyeongchang Games so far are a pairs figure skating team. But North Korea missed an Oct. 31 deadline to accept invitations from the I.O.C. and South Korea to join the Games. The I.O.C. has said it remains flexible, willing to consider wild-card entries for North Korean athletes.

In Tuesday’s talks, South Korea also suggested that the two Korean teams march together during the opening ceremony of the Olympics, Chun Hae-sung, the vice minister of unification, told reporters in Panmunjom after the morning’s negotiations.

The South also proposed that the two countries revive their program of temporarily reuniting elderly people who have not seen their cross-border relatives since the Korean War unofficially ended in 1953. Such reunions could take place in time for lunar New Year’s Day on Feb. 16, a traditional season for family reunions in Korea, the South Korean negotiators told their North Korean counterparts.

“We told them that both sides should cooperate, based on mutual respect, and end any acts of raising tensions on the Korean Peninsula,” Mr. Chun said. “We also called for the resumption of dialogue on denuclearization and peace-building.” The North’s response was not immediately available. The negotiations continued in the afternoon.

In recent decades, North Korea has alternated between provocation and dialogue, and it remained unclear whether its participation in the Olympics signaled an overall softening. For the South Koreans, who have been rattled by the exchange of threats of war between North Korea and the United States in the past year, the border talks provide a welcome reprieve, although some analysts warned that it might be short-lived.

South Korea hopes that the talks at Panmunjom will lead to other moves to ease tensions, like temporary reunions of elderly people in both Koreas who have been separated from family members since the Korean War.

South Korea’s president, Moon Jae-in, is a strong proponent of dialogue with North Korea, even as his country’s American allies say military action remains an option to halt the North’s nuclear brinkmanship.

Mr. Moon’s government says North Korea will be less likely to conduct a nuclear or missile test during the Olympics if its athletes are competing in the South. It hopes to use such a lull in the standoff to create a momentum for negotiations between North Korea and the United States.