Two releases this month have put the relationship between the press and the Oval Office on display: “Fire and Fury: Inside the Trump White House” by Michael Wolff, which caused a media whirlwind and was denounced by President Donald Trump, and “The Post,” the Steven Spielberg film that highlights The Washington Post’s standoff with the White House over the publishing of the Pentagon Papers in the 1970s. Here are three books that examine the historical dynamic between the presidency and the fourth estate. 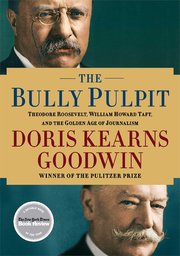 In this biography, Goodwin examines Theodore Roosevelt through his relationship with the press, arguing that his “complex and sometimes contentious partnerships” with investigative journalists helped him speak directly to the public to push his political agenda and expose corruption like “the human and economic costs of unchecked industrial growth.” He “tested his ideas on reporters,” frequently exchanged correspondence with his favorites and invited them to luncheons that could last until midnight. His policy was sometimes even informed by reporting: After reading Upton Sinclair’s 1906 “The Jungle,” which exposed the deplorable conditions of the meatpacking industry in Chicago, Roosevelt quickly moved to pass meat inspection legislation. Michiko Kakutani wrote that Goodwin “prompts us to reconsider the ways political dynamics have, and have not, changed.”

If you’re wondering how an appearance like Barack Obama’s on “Between Two Ferns” with Zach Galifianakis became acceptable, you might turn to this biography of Franklin D. Roosevelt’s press secretary, a man who fundamentally altered the way the presidency interacts with the press. Stephen T. Early discouraged Roosevelt from calling media sources directly, having him instead deliver a single message in news conferences held twice a week. Early expanded the mediums through which the president communicated to include radio and newsreels. He also helped create “Fireside Chats,” the series of evening radio addresses given by Roosevelt through the Great Depression.

Written by the reporters responsible for breaking the Watergate scandal for The Washington Post, this book turns the ordeal into “a fast-moving mystery, a whodunit written with ease,” wrote our reviewer. In addition to showing how Bernstein and Woodward investigated the scandal, the book also reveals the inner workings of a newsroom, including the role editors play in determining the stories that are printed and the risks publications take in printing and reporting stories. Bernstein and Woodward describe their high stakes reporting through anecdotes like a 3 a.m. meeting on an editor’s lawn (they were afraid of being bugged) or clandestine encounters with Deep Throat, Woodward’s deeply connected anonymous source, that are “superbly and suspensefully described.”