The official, who spoke to reporters on condition that he not be identified, also said that the United States had no connection to the Kurds in the northwestern Syrian city of Afrin, where the Turkish military has launched an invasion in recent days.

And he drew a distinction between allies — a term he said had legal connotations — and partners in a combat mission, like the Kurds. America’s actions on the ground in Syria, he said, would be driven by a calculation of its interests.

Taken together, the administration’s statements appeared to be a significant attempt to reassure Turkey’s president, Recep Tayyip Erdogan, who considers the Kurds a threat to his country’s internal stability.

But the Pentagon issued its own statement on Tuesday standing by its decision to create the Kurdish-led force. And a senior American commander praised the partnership with the Kurds, whose help was critical in a major American airstrike on the Islamic State, also known as ISIS, over the weekend.

“U.S. forces are training local partners to serve as a force that is internally focused on stability and deterring ISIS,” Maj. Adrian Rankine-Galloway, a Pentagon spokesman, said in the statement. “These local security forces are aimed at preventing the potential outflow of fleeing ISIS terrorists as their physical presence in Syria nears its end and pending a longer-term settlement of the civil war in Syria to ensure that ISIS cannot escape or return.”

The Pentagon has engaged in a rebranding effort, however, as the force was initially described as a border force, leading Turkey to fear the presence of thousands of American-backed, Kurdish troops on its border. Military officials are now saying that its duties will be mainly internal.

The debate over the partnership with the Kurds is taking place as the Kurds continue to play a major role fighting alongside the Americans in Syria.

The military’s Central Command said Tuesday that about 150 Islamic State fighters were killed in American airstrikes near As Shafah, Syria, on Saturday, in one the largest strikes against ISIS in the past year. The Kurdish-led militia, called the Syrian Democratic Forces, or S.D.F., helped guide the airstrikes, American officials said.

“The strikes underscore our assertion that the fight to liberate Syria is far from over,” Maj. Gen. James Jarrard, the commander of Special Operations forces in Iraq and Syria, said a statement. “Our S.D.F. partners are still making daily progress and sacrifices, and together we are still finding, targeting and killing ISIS terrorists intent on keeping their extremist hold on the region.”

Senior Pentagon officials and American commanders say that the Syrian Kurds will most likely serve as the backbone of the allied forces on the ground in Syria for months to come.

Echoing earlier comments by Defense Secretary Jim Mattis, the commander of the United States Central Command, General Joseph L. Votel, said in an interview last month that American forces would remain in eastern Syria, alongside their Syrian Kurdish and Arab allies, as long as needed to defeat the Islamic State. 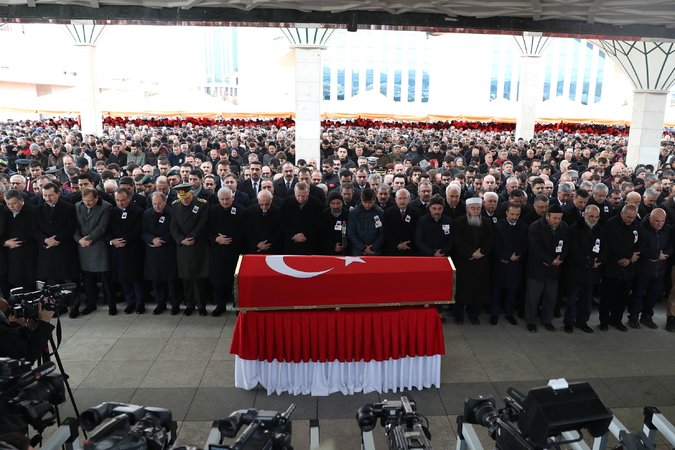 President Recep Tayyip Erdogan of Turkey was among those at the funeral of a soldier killed in the country’s operation in Syria.

“What we don’t want to do is leave a mess,” General Votel said, something “worse than what we found.”

Coalition forces are attacking the last remnants of the Islamic State in the Euphrates River valley of Syria, near the Iraqi border. But as that campaign begins to wane, the American partnership with the Kurds is bringing it into ever-more-direct conflict with Turkey.

While the Turkish military incursion into Afrin has seized the world’s attention, American, NATO and Turkish officials have directed their eyes east, to the strategic city of Manbij.

Home to a contingent of United States Special Operations troops who are training and equipping Kurdish forces that control the city, Manbij is increasingly emerging as the ultimate target of the Turkish operation and a far more serious source of tension than the Afrin offensive.

A Turkish assault on Manbij could bring its forces into direct conflict with the Americans, with unpredictable results.

“It may bring a direct military confrontation, as American forces are there,” said Gonul Tol, director of the Center for Turkish Studies at the Middle East Institute in Washington. “The death of even one American soldier may completely break ties.”

“Terrorists in Manbij are constantly firing provocation shots,” Mr. Cavusoglu said. “If the United States doesn’t stop this, we will stop it.

Mr. Tillerson said the United States would keep working with Turkey to stabilize the situation and address its security concerns.

The level of concern about Turkish-American relations was reflected in the flurry of meetings this week between officials of the two countries.

American officials, led by the deputy assistant secretary of state for European and Eurasian affairs, Jonathan R. Cohen, flew to Ankara, Turkey’s capital, for meetings scheduled for Wednesday, including with security officials. They were joined there by Rose Gottemoeller, the deputy secretary general of NATO, who was in Turkey for a planned, two-day visit.

In an interview with the NTV news channel, Ms. Gotemoeller treaded carefully, saying that “Turkey has legitimate reasons to be concerned about the Kurdish armed organizations in Syria,” but adding that “one should keep a balance between the threat and the reaction to it.”

Turkey has long complained about American support for Syrian Kurdish militias, which it says have emboldened the Kurdish separatist movement that Ankara considers a threat to its territorial sovereignty and is prepared to go to great lengths to counteract. Turkish officials say that this has allowed weapons and support to reach the outlawed the Kurdistan Workers’ Party, or P.K.K., which is considered a terrorist organization by the United States and Europe and has waged a decades-long insurgency in Turkey.

Turkey, which shares a long border with Kurdish-controlled areas of northeastern Syria, has been particularly incensed by the Kurdish militias’ seizure of Arab villages and towns in the area.

Manbij is in many respects the gateway to those areas, a regional center some miles west of the Euphrates. It is now under the control of the Syrian Democratic Forces, and has been since last August, when it expelled the Islamic State.

Robert S. Ford, a senior fellow at the Middle East Institute and a former Ambassador to Syria, wrote in an analytical column that Turkey’s military operations in Syria demonstrated the difficulties of the American position. Turkey’s brushoff of American concerns made the United States look weak, Mr. Ford wrote, adding that some Kurdish observers were accusing America of being an unreliable ally.

“Over the longer term, it is hard to see how the U.S. will secure its stated political goal of stabilization in eastern Syria and genuine governance reforms in Syria,” he wrote.