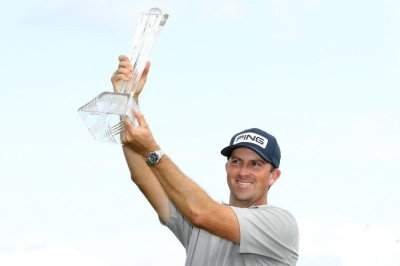 July 26 (UPI) — Michael Thompson birdied two of his final three holes Sunday for a 4-under 67 and a two-shot win over Adam Long in the 3M Open at TPC Twin Cities in Blaine, Minn.

It marked Thompson’s second PGA Tour victory, with his previous triumph coming seven years ago at the 2013 Honda Classic.

“It is a little sad that there wasn’t anybody out there to cheer on some of the great shots that I hit toward the end, but I know everybody who’s rooting for me at least was watching and screaming at their TV,” Thompson said. “This is definitely a win for everybody who supported me throughout the years. It doesn’t diminish the excitement.”

Long took second place after his final-round 64, finishing at 17-under 267. Tony Finau, Emiliano Grillo and Richy Werenski — who shared the lead with Thompson after Friday and Saturday — were among those who ended three strokes back for a nine-way tie for third. Werenski had a 70 for his worst round of the tournament Sunday.

Defending champion Matthew Wolff finished with a 14-under 270 for a six-way split of 12th place.

Finau, the only player ranked inside the top 30 in the field to reach the weekend, closed with a 68. Dustin Johnson, Brooks Koepka, Tommy Fleetwood and Paul Casey failed to make the cut.

The PGA Tour’s next event is the WGC-FedEx St. Jude Invitational, which begins Thursday.