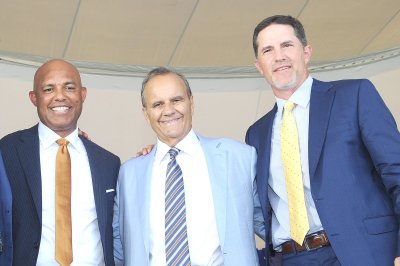 Rivera, as he did a Major League record 652 times in his career, closed the day out and gave the final speech.

Martinez hit for a .312 average and 309 home runs with the Seattle Mariners from 1987 to 2004. Halladay won two Cy Young Awards and pitched two no-hitters — including a perfect game — for the Philadelphia Phillies in 2010.

Halladay died in a 2017 plane crash. His wife, Brandy, gave an emotional speech about her late husband.

“I think that Roy would want everyone to know that people are not perfect,” she said. “We are all imperfect and flawed in one way or another. We all struggle, but with hard work, humility, and dedication, imperfect people can still have perfect moments.”

“Roy was blessed in his life and in his career, and had some perfect moments, but I believe they were only possible because of the man he strived to be, the teammate that he was, and the people he was so blessed to be on the field with.”

Halladay, Martinez, Mussina and Rivera were all elected by voters in January. The Today’s Game Committee chose Baines and Smith in December.

Baines dedicated his induction to his late father.

“So in the end, when you ask me why I’ve never been outspoken or said very much, think of my dad and the lesson he passed on to me many years ago, often when we played catch in the yard,” Baines told the crowd. “As he told me, ‘Words are easy, deeds are hard.’ Words can be empty. Deeds speak volumes, and sometimes they echo forever.”