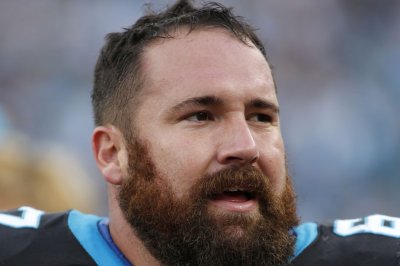 Aug. 1 (UPI) — Former Carolina Panthers center Ryan Kalil, who retired after the 2018 season, has agreed to resume his playing career — with the New York Jets, the team announced Thursday.

Kalil, 34, is a five-time Pro Bowler and two-time first-team All-Pro selection. Carolina selected him in the second round of the 2007 NFL Draft and played his entire career for the Panthers.

Kalil still needs to take his physical, the team said in a news release. Kalil is expected to sign a one-year, $8.4 million contract if he passes the physical, according to ESPN and NFL Media.

The Jets hoped to sign a center in free agency but stuck with veteran Jonotthan Harrison, who started eight games last season. Harrison has 32 career starts since entering the league as an undrafted free agent with the Indianapolis Colts in 2014.

Kalil started 145 of the 148 regular-season games he appeared in with the Panthers.

New York opens the preseason next Thursday against the rival Giants. The Jets begin the regular season on Sept. 8 against the Buffalo Bills in East Rutherford, N.J.