In 2003 at a Kurdish investment seminar in Erbil, Mr. Schute met Douglas Layton, an American who came to Kurdistan in 1992. Mr. Layton, whose round spectacles and woolen cap lend him the air of a paperback spy, had survived a $1 million bounty on his head, courtesy of Saddam Hussein. After the dictator’s capture and execution, Mr. Layton journeyed to Hussein’s palace in Baghdad, where he found his outlandish throne and sat in it. “You’re gone,” Mr. Layton whispered to Saddam’s ghost, “and I’m still here.”

Mr. Schute and Mr. Layton, who had been working for the Meridian Health Foundation, both knew of Kurdistan’s cultural riches and friendly people, so they joined forces to create what eventually became Kurdistan Iraq Tours, the only inbound tourism operator in Kurdistan. The idea seemed absurd.

“Everyone said no one will come to Iraq, and I said but they’ll come to ‘the other Iraq!’” Mr. Layton recalled. “I believed, and I still believe, that tourism is the future.”

For their main local guide, they hired and trained Balin Zrar, a charismatic, chain-smoking Kurd. Mr. Zrar had spent seven years running an Italian restaurant in London after he smuggled himself to Europe — an epic tale that involved time in an Iranian prison camp and riding for days curled atop a spare tire under a tractor-trailer. After the London bombings, Mr. Zrar returned to Kurdistan to dabble in real estate. For the guide-position interview, Mr. Layton asked him if he liked history. “I hate history,” replied Mr. Zrar, now in his early 40s, and the candor landed him the job. No one believed he’d be busy.

In 2008, though, things took off. The company landed a contract with California-based Distant Horizons to run its Kurdistan cultural trips and soon others followed. Momentum built. By 2011 The New York Times put Iraqi Kurdistan on its annual list of places to go. National Geographic Traveler did the same. “Top Gear,” the British television show, filmed a special there. In 2012 tourism arrivals surged 30 percent, year-over-year, to about 2.2 million visitors. Copycat inbound companies sprang to life. Starwood, Kempinski and Marriott lined up to manage new luxury hotels. By spring 2014, Kurdistan Iraq Tours had 15-person groups booking 11-day itineraries and was actually making some money. 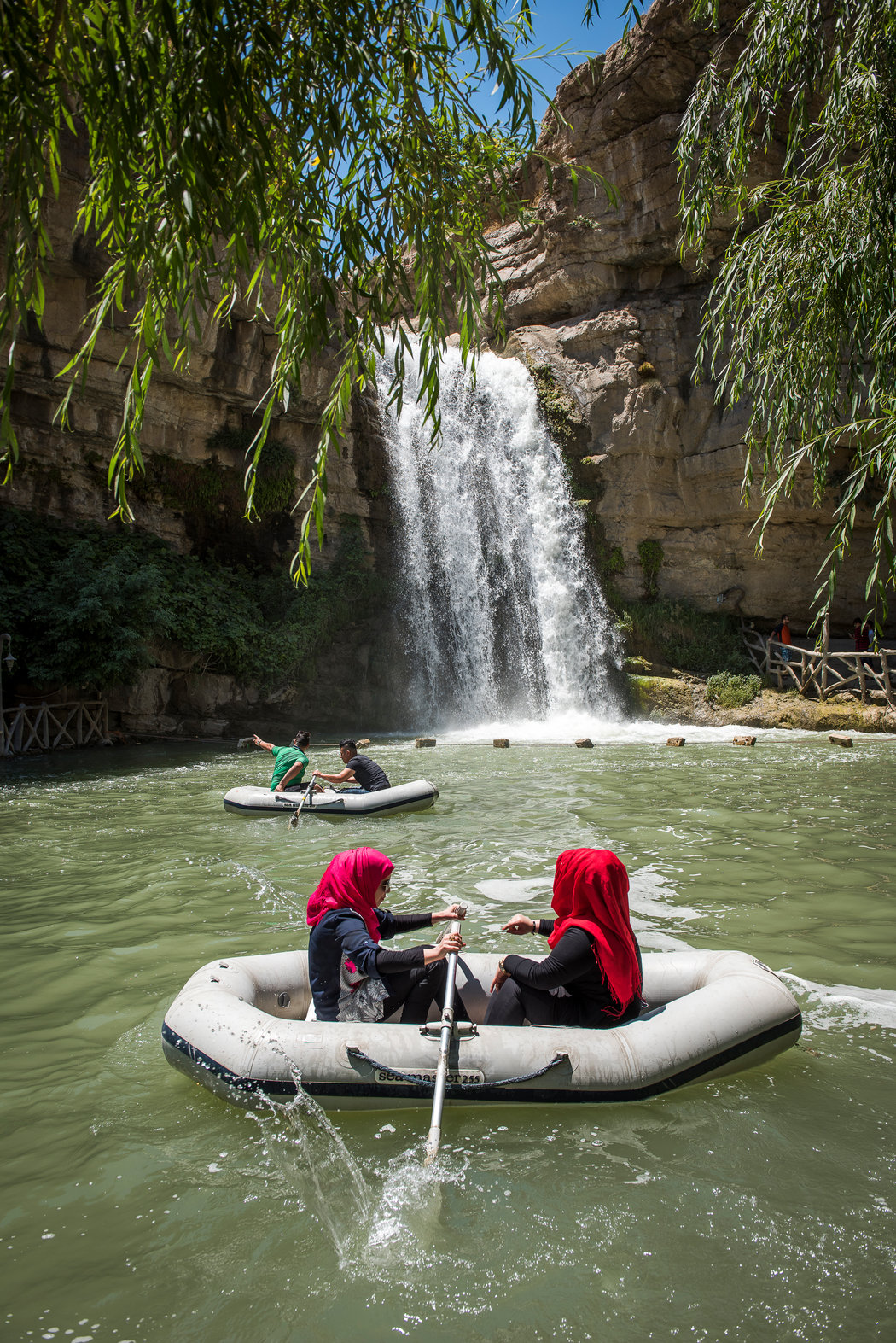 Cooling off beneath the Gali Ali Begg waterfall.

Then, ISIS showed up.

The militants steamrolled down the Tigris and pushed into Kurdistan. They got so close to Erbil’s city gates that even Mr. Schute was worried. Tourism companies shut down. Seventy hotels closed. Many flights ceased. “We were the last guys standing,” Mr. Layton said.

But all through those awful years the men worked behind the scenes, speaking to lawmakers and publishing a gorgeous, comprehensive guidebook to the region. As soon as ISIS was gone they knew travelers would come wandering back.

THE RED-EYE FROM AMMAN touched down just before dawn in Erbil where Mr. Zrar waited. He had a slim build and black hair flecked with gray. He fidgeted, as most Kurdish men do, with a string of beads called a tasbih. Outside the air was hazy and cool.

Our contingent of five North Americans had pretty much spent a lifetime traveling. Even so, only one of us, the head of an adventure travel trade association, had visited Kurdistan before. This time he’d brought along his son, who’d turn 17 on the trip. A Canadian expat living in Hong Kong and a photographer from Los Angeles who had been to North Korea 10 times rounded out our group.

We piled into a mini bus and rolled into the city. Rows of half-finished skyscrapers rose from the earth like the picked-over rib cage of a great steely beast. Barbershops, bookstores, mosques and carts laden with wild cucumbers and cigarettes scrolled by the window. Unlike Iraqi Arabs, few Kurdish women wore head scarves. If you ignored the road signs pointing to Baghdad, you could mistake this for Turkey.

The plan was to spend a week traveling in a clockwise loop that started and ended in Erbil, taking in cities like Duhok and Sulaymaniyah along the way. We’d hike in the Zagros Mountains, paddle kayaks on Lake Dukan, and eat kebabs and flatbread. Often we’d pause over sugary tea outside noisy bazaars and linger in museums highlighting Kurdish traditions and history. Mr. Layton, who now lives in Connecticut, could not join us, but Mr. Schute, still in Erbil, would spend time with us.

Immediately it became clear that this would be unlike any other trip. Mr. Schute also serves as a senior security adviser to the Kurdish interior ministry and works closely with the Peshmerga, which means “those who face death.” More than 100,000 of these Kurdish soldiers — our allies against Saddam Hussein and ISIS — manned a nearly impenetrable front riddled with tank ditches and checkpoints that has kept Kurdistan an enclave of comparative security while much of the rest of Iraq remains too dangerous for tourists. The Peshmerga, coalition forces and the Iraqis had cornered the last of ISIS’s fighters in Mosul’s old city along the Tigris. The effort to root them out for good was being coordinated through the Zerevani Peshmerga headquarters outside Erbil. Mr. Schute arranged to take us there.

C-17s roared overhead as we arrived. In the distance you could see a dome that the South Koreans had built for a gym and several squat metal buildings. Guards led us into a room with a long table set with bananas and apricots and cold cans of Pepsi. United States Army Lt. Col. Darin E. Huss, the center’s director, and Iraqi and Kurdish generals, came in to answer our questions about the fight. “In 10 days it will be finished, inshallah,” Staff Major Gen. Saad Khalid Yasin told me. (It would be more like six weeks.)

Most eye-opening of all, though, was the base’s Mad Max junkyard of captured ISIS vehicles. The militants had welded thick armored plates around old Soviet personnel carriers and attached grids of rebar along their sides to disperse incoming rocket blasts. Some rigs had heavy metal prows to better ram a checkpoint. Others had been reduced to mangled heaps of metal. I climbed inside one that had been scorched beyond all recognition. On the floor lay a chalky white bone. Lamb. Someone’s lunch had ended poorly.

OVER THE NEXT FEW DAYS we took in more mainstream sites. We strolled around Erbil’s citadel, a fortress on a mound, that dates to 6000 B.C., and mingled with Arab Iraqis from the south who seemed overjoyed to friend an American on Facebook. I stuck my nose in sacks of za’atar and sumac in the city’s frenetic bazaar and watched two teen lovebirds — she in a hijab, he in jeans — kiss behind a tree in a park where no one could see but God.

The next morning our driver headed north toward the Mar Mattai monastery. We slipped past wheat fields, gas stations with knockoff names like “Shall” and “Nobil,” and a refinery — a reminder of Kurdistan’s agricultural economy and the fact that Iraq controls some of the richest oil fields in the world, a quarter of which lie in Kurdistan. Kids played on the banks of the Greater Zab River where earthen bunkers once shielded Iraqi tanks during the 2003 invasion. This was the Green Line, the point behind which Saddam withdrew his forces after the creation of a no-fly zone over Kurdistan following his defeat in the 1991 Gulf War.

The air turned hair-dryer hot as we wrapped up our time at the monastery. From there we drove to a field just outside a village called Amian. A lone cow stood in the grass. A kid in a yellow shirt rode by, waving, on a bike. In the distance rose a gumdrop-shape dollop of earth. It was a tell, or a man-made hill formed when ancient villages are built and rebuilt atop one another over thousands of years until they’re abandoned and the grass reclaims them.

Kurdistan is littered with these. Very few of them have been excavated, Hashim Hama Abdullah, the director of the Slemani Museum in Sulaymaniyah, would tell me later after I’d spent a morning studying the museum’s ancient stelae, tablets and other artifacts. “No excavating happened at all under Saddam,” he said. “Now teams are coming in.”

Kurdistan has no real budget for tourism projects, which means few attractions have basic things like interpretive signs. This field, which also has never been excavated, would be just a field without Mr. Schute to explain it. In 331 B.C. the Persian king Darius III picked this now peaceful place to face Alexander the Great of Macedonia once and for all. The ensuing fight, the Battle of Gaugamela, saw Darius’s far greater force suffer such horrific losses that soon the Macedon kingdom would stretch from Greece to Pakistan. The battle counts as one of the most important military victories of all time, Mr. Schute said.

“Can you feel it?” he asked, as he imagined the war elephants, the scythed chariots and the tens of thousands of soldiers lining up to hack each other to bits. “I get here and I can feel it.”