Senator Mitch McConnell, the majority leader and Kentucky Republican, is expected to bring the bill to the Senate floor within the next month.

Hurdles remain. The House has already passed its own far more sweeping deregulatory effort. And progressive Democrats who warn that the legislation would return Wall Street to its more reckless past are mobilizing in hopes of derailing the legislation — even if that means attacking fellow Democrats who support it.

“This bill increases the risk of another taxpayer bailout, and I will continue to challenge supporters of this bill — from both parties — to explain why they stand on the side of big banks instead of working families,” said Senator Elizabeth Warren, the Massachusetts Democrat.

Still, lobbyists, lawmakers and administration officials saying this is the make or break year for overhauling Dodd-Frank.

Rob Nichols, president of the American Bankers Association, said the legislation would correct what banks view as regulatory overreach borne of a hasty legislative effort to shore up a cratering financial system after the 2008 crisis. “What I do think is significant here is that you have a recognition that’s been building for several years that parts of the policy response were misguided, ill-conceived and missed the mark,” Mr. Nichols said.

Banking giants such as J.P. Morgan and Goldman Sachs — which would see little in the way of change under the Senate bill — have said little about the looming legislation. But Jamie Dimon, the chief executive of J.P. Morgan, has been a vocal proponent of revising the Dodd-Frank law, saying in a letter to shareholders in April 2017 that “poorly conceived and uncoordinated regulations have damaged our economy, inhibiting growth and jobs.”

Some industry lobbyists have pointed out that rules ushered in after the financial crisis have in some ways been beneficial for the big banks, acting as a barrier to entry for any bank without the resources to handle the additional compliance costs.

The bill that is working its way through the Senate was brokered primarily by Senator Mike Crapo, the Idaho Republican who chairs the banking committee, and moderate Democrats such as Senator Heidi Heitkamp of North Dakota, Senator Jon Tester of Montana, Senator Joe Donnelly of Indiana and Senator Mark Warner of Virginia. Eleven Senate Democrats are co-sponsoring the bill, making its passage in the Senate likely.

Backers argue that the bill would offer much-needed relief to small banks and credit unions in parts of America that have been struggling under regulations that had primarily been aimed at the biggest banks.

“A lot of what was Too Big To Fail under Dodd-Frank became ‘too small to succeed’ because of the onerous regulatory burdens,” Ms. Heitkamp said.

Under the bill, firms with less than $10 billion in assets would be exempt from the so-called Volcker Rule, which prohibits banks from making risky bets with federally-guaranteed deposits. Mortgage rules for small lenders would also be eased. 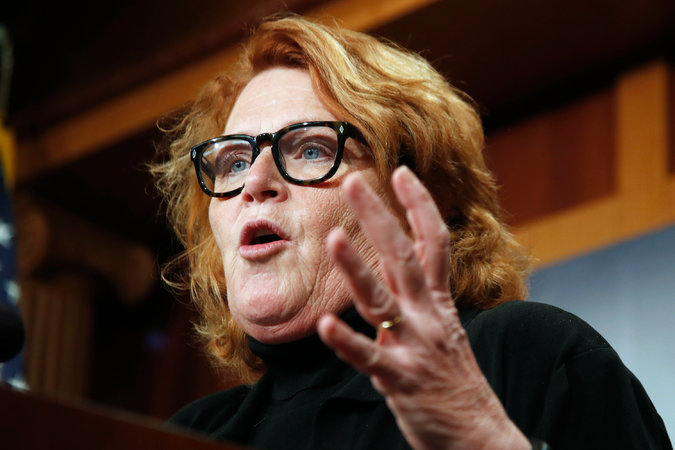 Some critics of the bill say it goes too far. They argue that many of the institutions that received bailout money during the downturn would get less oversight.

“I think it’s going to increase stress on the financial system,” said Marcus Stanley, policy director for Americans for Financial Reform, a nonprofit organization calls for tougher regulation of Wall Street. “It’s going to increase the risk to individual banks and when significant numbers of individual banks go bust, that increases the stress on the system.”

Still, in a sign of the fight to come, other critics — including some House members — say the Senate legislation does not go far enough. House Republicans passed a far more aggressive bill last summer, which would be far more crippling to Dodd-Frank. That bill would, among other things, remove the prohibition against using federally insured funds for risky lending and gut the Consumer Financial Protection Bureau. Under the Senate bill, it would remain intact.

Many House Republicans could find it difficult to back a bill that leaves the bureau unscathed, but weakening it has almost no chance in the Senate.

The Trump administration has signaled its support of the Senate bill, with Gary D. Cohn, director of the White House’s National Economic Council, telling Bloomberg News earlier this month that the Senate bill would “change the regulatory environment for the vast, vast majority of banks in the United States.”

In an interview with The Wall Street Journal last week, Mr. Trump said: “We’re looking at Dodd-Frank very strongly and I think we’ll have something on that.”

Efforts to loosen Wall Street regulations are already underway, even without legislation. The Office of Financial Research, which is supposed to spot red flags on Wall Street, lost its director last month and the Treasury Department is seeking to reduce its funding and staff. The Treasury Department has also issued a series of reports recommending changes to a number of other post-crisis rules, including rescinding a requirement that companies disclose the pay ratio between chief executives and workers.

Mr. Trump has been hiring regulators who have expressed reservations about — or been critical of — some of the post-crisis rules. In November, Mr. Trump tapped Mick Mulvaney, his budget director, to be acting director of the Consumer Financial Protection Bureau. Mr. Mulvaney once characterized the bureau as a “sick, sad” joke.

Mr. Mulvaney has been hiring like-minded staff members to ensure that the consumer bureau’s new leadership will not be prone to what he considers regulatory overreach. Mr. Mulvaney has also frozen the bureau’s data collection system, a move that has slowed its ability to conduct examinations.

Mr. Trump is expected to soon announce a nominee to lead the consumer bureau. J. Mark McWatters, the head of the National Credit Union Administration, is widely considered to be the top choice, but the administration is still considering other finalists. Some bank lobbyists have raised concerns about whether Mr. McWatters, who has asked the consumer bureau to exempt credit unions from examination and enforcement, would give them preferential treatment.

. The appointment last year of Randal K. Quarles as the Federal Reserve’s vice chairman for supervision is also expected to benefit those seeking looser oversight: Mr. Quarles has suggested that some of the strictures imposed on the financial industry since 2008 should be relaxed.

“I think the bigger changes to Dodd-Frank in 2018 will come from changes at the regulators from the new regulatory team and not from new legislation, even if it is enacted,” said Aaron Klein, policy director of the Center on Regulation and Markets at The Brookings Institution.

Despite the bipartisan support for legislative action, it will not happen without a fight, especially when Wall Street is generating record profits and after companies just received large tax cuts. Moderate Democrats who sign on to a bill to help community banks can expect to hear from the party’s progressive wing that they have defanged Dodd-Frank.

The dissension among Democrats was evident as the banking committee considered the bill last year. Senator Sherrod Brown, Democrat of Ohio, and Ms. Warren were especially vocal in their opposition to a bill that they viewed as a dangerous giveaway.

“This major move to deregulate the big banks is a major move to undermining Dodd-Frank,” said Adam Green, a founder of the Progressive Change Campaign Committee. “Especially in these Red States where economic populism is the key to Democrats winning re-election in 2018, the folks in the most competitive elections should realize that doing the bidding of the banks is not especially helpful to them.”

Ms. Warren is expected to mobilize her network of progressive activists to oppose the changes to Dodd-Frank. She is even prepared to make her Democratic colleagues cast difficult votes during the amendment process to drive home the point that banks that received bailout money should not be deregulated.

For Democrats who are crossing Ms. Warren on the issue, the hope is that the fallout will be minimal.

“Were going to agree to disagree,” said Senator Mark Warner, a Virginia Democrat who sits on the banking committee. “I don’t think this is going to split open the kind of unity you’ve seen in the Democratic Party.”