The question on the table after the cutoff of military aid to Pakistan is who will come under the most pressure: the Pakistanis, or the coalition fighting the Taliban.

Muhammed Umer Daudzai, a former Afghan interior minister and ambassador to Pakistan, said the pressure on Pakistan had come too late, with the country having developed regional allies who would help it weather the financial toll.

“The financial sanctions may not bite Pakistan because they have developed alternatives,” Mr. Daudzai said. “The only area the impact could be huge, but it’s a bit too early to judge, is the field of air force. The Pakistani system is still hugely dependent on the U.S. It can take a long time to switch from that.”

Pakistani officials expressed both anger and caution over the American move. Several indicated that cutting off ground supply routes to Afghanistan was actively being considered, but that a formal decision was not likely to be announced on Friday.

The commander of the Pakistani Air Force also seemed to suggest that Pakistan’s airspace might be blocked to the Americans. In Islamabad on Thursday, Air Chief Marshal Sohail Aman said his force was “fully prepared to defend all the aerial frontiers of the country.” 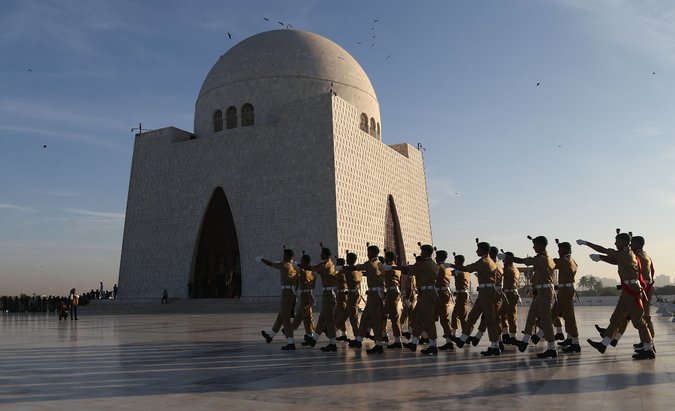 Pakistani Army cadets performing in Karachi during a ceremony last month honoring the founder of the nation. It is unclear who might come under more pressure from the cut in American security aid: the Pakistanis or the coalition fighting the Taliban.

On Friday, the Foreign Ministry released a statement saying, “We are engaged with the U.S. administration on the issue of security cooperation and await further details.”

“We believe that Pakistan-U.S. cooperation in fighting terrorism has directly served U.S. national security interests as well as the larger interests of international community,” the statement said. And in a measured criticism of Mr. Trump’s move, it said that working for peace requires “mutual respect and trust,” adding that “arbitrary deadlines, unilateral pronouncements and shifting goal posts are counterproductive in addressing common threats.”

Across the Pakistani political spectrum, officials accused the United States of making Pakistan a scapegoat for the failures in Afghanistan.

Imran Khan, a prominent opposition politician whose positions on foreign and defense policy are often closely aligned with Pakistan’s security establishment, called for steps to disengage diplomatically from the United States.

“We must immediately remove excessive U.S. diplomatic, nondiplomatic and intelligence personnel from Pakistan so that diplomatic parity is established according to international legal norms governing diplomatic relations between states,” he said in a statement, adding that the ground and air routes for American military supplies should also be shut down.

In past cases when relations frayed and Pakistan blocked American access to its supply routes, the United States military relied on a more expensive alternative that connects Baltic and Caspian ports through Russia and Central Asian countries. But that route is vulnerable to Washington’s chilly relations with Russia, which has used its influence over Central Asian states to limit access.

At its peak, when the United States had about 100,000 troops in Afghanistan, the alternative route helped with the transportation of about one third of nonlethal material with Russia’s consent. The American-led coalition also used Manas, a major air base in Kyrgyzstan, as the transit point for almost all of the coalition troops and a refueling center for tens of thousand aircraft.

Kyrgyzstan, apparently in response to Russian pressure and incentives, first increased the annual rent to $60 million from $17 million, and then the United States left the base in 2014.

From the American and Afghan standpoints, trying to change Pakistan’s outlook has only grown more difficult in recent years as the relative consensus has broken down among major players in the region — like Russia and Iran — over the American mission to eradicate international terrorist groups in Afghanistan.

In private, senior Afghan officials said they were watching just how focused the United States would be in maintaining the pressure on Pakistan, a nuclear state that has long managed to shrug off previous American and international pressure.

More publicly, however, President Ashraf Ghani and his government were measured in their reaction, staying away from directly addressing Mr. Trump’s move to freeze what could amount to more than a billion dollars in American aid.

“We welcome any decision that contributes to bringing stability in the region and Afghanistan,” said Haroon Chakhansuri, a deputy chief of staff to Mr. Ghani. “We want honest partnership in the region to fight against a common enemy, terrorism.”

Some Afghan officials and analysts feared that Mr. Trump’s pressure on Pakistan might escalate the violence across Afghanistan before it brings any change in Pakistani cooperation. Already, officials are bracing for more urban bombing attacks in the winter months, when the regular fighting slows down a bit.

An important factor in whether the American pressure could result in a change of Pakistani attitude is whether American diplomacy can appeal to China and Russia’s shared concerns of militant extremism in the region, and persuade them not to give Pakistan a release valve. Russia is concerned about the rise of an Islamic State affiliate in Afghanistan, most of whose fighters are from the tribal areas of Pakistan, while China fears that an unstable Afghanistan provides sanctuary to its Uighur insurgency.

“You have an anti-American sentiment in the region on the one hand, but on the other hand you have the fear of terrorism and extremism in the region,” said Davood Moradian, the director of the Afghan Institute for Strategic Studies in Kabul. “If the U.S. uses active diplomacy, it can convince the regional players to align with efforts to stabilize Afghanistan, because they will not compromise on their own national security for the sake of Pakistan.”

Mr. Moradian said factors that make Pakistan a military power, such as hardware and training, are oriented toward the United States, with China less able to easily fulfill them. And he described the Pakistani elite as more integrated in the West — with houses, business, and bank accounts there — and thus more likely to feel the pressure of targeted sanctions.

He continued: “Pakistan’s success has been in absorbing pain for a short period, and then getting away. Washington has not been able to bear pain for a limited period of time in the hopes of longer success.”

Before the Trump announcement on freezing aid to Pakistan, senior Pakistani officials had shrugged off the threats, describing American assistance as meager compared with China’s. One official said that every threat from Washington was pushing Pakistan closer to China. The two countries have a partnership to develop up to $60 billion in infrastructure in Pakistan under the “One Belt, One Road” program, and have tightened their military ties.

Khawaja Muhammad Asif, Pakistan’s foreign minister, recently urged a revisiting of ties with the United States, which he called neither a friend nor an ally.