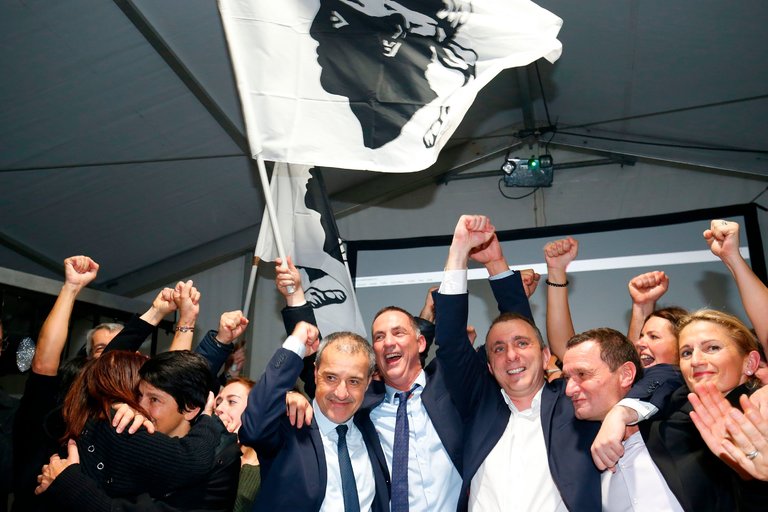 Corsican nationalists including Jean-Guy Talamoni, center left, and Gilles Simeoni, center, celebrated after the election results were announced on Sunday on the French Mediterranean island.

A coalition of moderate and hard-line nationalists won 56.5 percent of the vote in Sunday’s second-round election, according to figures from the Interior Ministry. Local media outlets showed nationalists singing Corsican songs and celebrating in the streets after the results were announced.

The nationalists on Corsica, a once-restive island of 320,000 people, want more autonomy from Paris. But unlike those in the nearby Spanish region of Catalonia, they aren’t yet seeking full independence.

The nationalist coalition will have 41 of the 63 seats in the new assembly, which takes office on Jan. 1. Candidates from Mr. Macron’s Republic on the Move party won six seats.

The vote centered on issues such as amnesty for political prisoners, the recognition of Corsican as an official language alongside French and protections for locals who want to buy real estate on Corsica, a popular destination that the French refer to as the “Island of Beauty,” which is also rich in history and well-known as the birthplace of Napoleon.

The nationalists formed an alliance between the more popular, moderate group led by Gilles Simeoni, who wants devolved power, and a fiery movement led by Jean-Guy Talamoni, who aims to eventually secure full autonomy for Corsica.

The vote came a day after French Basques marched through Paris to demand the release of fellow Basques held in prisons around the country for separatist activity.