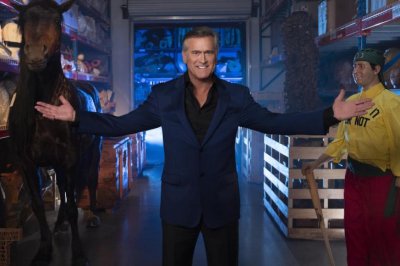 June 7 (UPI) — Actor Bruce Campbell is returning to TV as the host of the latest incarnation of Ripley’s Believe it or Not!, and the cult star hinted that his most iconic character, Evil Dead‘s Ash Williams, is also due for a return.

The 60-year-old actor, writer, director and producer is taking on hosting duties for the Travel Channel’s version of Ripley’s, a brand that began as a newspaper feature in 1919 before bringing its true-life stories of unusual people, objects and events to TV in three previous series, including a 1982-1986 run hosted by Jack Palance and a 2000-2003 series featuring actor Dean Cain.

Campbell told UPI in a recent interview that this latest incarnation, which premieres Sunday night, brings some changes to the formula, eschewing the “newsreel style” of the old shows for more of a “documentary style” that goes in-depth into the lives of the people whose extraordinary feats are featured on the program.

“I think since the last TV show, we’re really just trying to catch up with all the stuff that we’ve missed — it’s endless,” he said.

The featured subjects on the first season of Ripley’s include extraordinary card-throwing, motorcycle stunts, people whose lost limbs are replaced with bionics, the mathematics involved in making an OK Go music video and a wide variety of strange and unusual acts of nature.

Campbell said the show modernizes the brand by doing away with an outdated word: “freaks.”

“We’re celebrating — a celebration of extraordinary abilities,” he said.

The host said he isn’t worried about the Internet diminishing the appeal of the brand, despite the wide variety of unusual, extraordinary and sometimes shocking content available online.

“Amazing is still amazing,” he said. “Extraordinary is still extraordinary. That doesn’t get dampened by the fact that we can watch, you know, Russian intersection security cameras of horrible accidents.”

Ripley’s, he said, is about more than just showcasing the unusual. It’s about telling the real human stories behind the unusual.

“You can watch the footage on YouTube, but you’re not going to get the story behind it,” he said.

Return of The King

The hosting job represents Campbell’s latest emergence from being “selectively retired” at his home in the Oregon mountains after the 2018 cancellation of Starz’s Ash vs. Evil Dead, but the actor said the story of Ash Williams, which began with 1979 cult horror classic, The Evil Dead, will continue later this year in video game form.

“The real Evil Dead game, with Ash, with me doing the voice, will be coming, probably six months down the road,” he said.

The character recently was announced as a cameo in the survival game Dead by Daylight, and has been rumored to make an appearance as a playable character in Mortal Kombat 11 — a rumor both the actor remained playfully coy about.

“Mortal Kombat. That can’t be confirmed, but — you know, Ash might pop up,” Campbell teased.

He said his retirement from the Ash Williams mantle was less about letting the character go than it was about a desire to not “crawl around in the mud and the blood anymore.”

Despite being finished playing the action hero, Campbell said he still is more than willing to act in the projects from at least one filmmaker: himself.

“That’s more of what I want to do these days, a lot more home-grown stuff,” he said. “Spend a little more time at home writing — the only way you can get a script to shoot is to write it, I’ve found. So I’m just a writing fool up here on the mountaintop.”

Campbell, whose name has long been associated with the horror, thanks to the likes of the Evil Dead franchise, said he has been gratified in recent years to see the genre return to its suspenseful roots following the brief popularity of graphic violence-based horror such as the Saw and Hostel franchises.

Campbell pointed to his longtime friend and frequent collaborator, Sam Raimi, as an example of someone whose filmmaking is more rooted in telling stories than capitalizing on popular trends.

“Watch two [of Raimi’s] movies without the sound,” he said. “Watch Evil Dead 2 and watch A Simple Plan and you won’t know that they were directed by the same guy. He doesn’t impose his style upon the story. He lets the story dictate his style. That’s the way to go. The story is everything.”

The entertainer said he has also been heartened in recent years to see more horror, sci-fi adventure and even superhero films — what used to be called “B movies” — break into the mainstream, surpassing “big serious stuff” like heavy dramas in both budget and box office returns.

“I’m glad they’ve come around, because B movies have forever told more fantastic stories than the A pictures. Now it’s all just a little more fun, because I think the movie-going audience is way younger, and the executives who run the studios are way younger, and they’re all comic book freaks,” he said. “So, for all the geeks out there, enjoy it, this is your golden era.”

Campbell said he will be spending time among the geeks this summer, when he and some of the “amazing people” featured on the first season of Ripley’s take their stories to San Diego Comic-Con.

He said part of the fun at these conventions is meeting fans and seeing which of the characters from his long career they associate him with.

“I get outed more by my voice these days, because I don’t look like the 21-year-old Ash,” he said. “But they’ll hear my voice and look around and go ‘Oh, are you that guy?’ I’ll get outed for Burn Notice because I actually still sort of look like that guy.

“Conventions are fun because you see what photograph they put in front of you. So it lets you know what people are watching — Hercules, Xena, Evil Dead, new Evil Dead, old Evil Dead. It’s awesome.”

In the long-term, the Make Love the Bruce Campbell Way author said he plans to publish more books, possibly including a collection of essays, in addition to his independent film plans and potentially creating a TV series.

“I’ve got plenty of stuff in the hopper. So, never say never,” he said.

Ripley’s Believe It or Not! premieres Sunday at 9 p.m. EDT on the Travel Channel.