“All New Yorkers want a safe neighborhood where police and communities are partners and where your success is determined by your hard work and God-given potential,” she said, addressing a crowd of more than 900 huddled with blankets and handwarmers on the frigid City Hall plaza. “These are not Republican or Democratic values. These are not even just New York values. These are American values.”

In a speech marked by messages of cooperation and a summary of her record, Ms. James took two veiled shots at Mr. de Blasio, bringing up the need for public housing that is “free of dangerous lead” — a reference to failures at the city’s Housing Authority under Mr. de Blasio to test for the potentially hazardous lead paint — and the city’s chronic homelessness crisis. “The best solution for homelessness is more homes, not more shelters,” she said. The mayor has called for 90 new shelters across the city.

But Mr. de Blasio, from his seat behind the podium on the dais, nodded in agreement both times.

“Today was the first unofficial day of the 2021 campaign,” said David Greenfield, a former city councilman from Brooklyn who attended the ceremony. 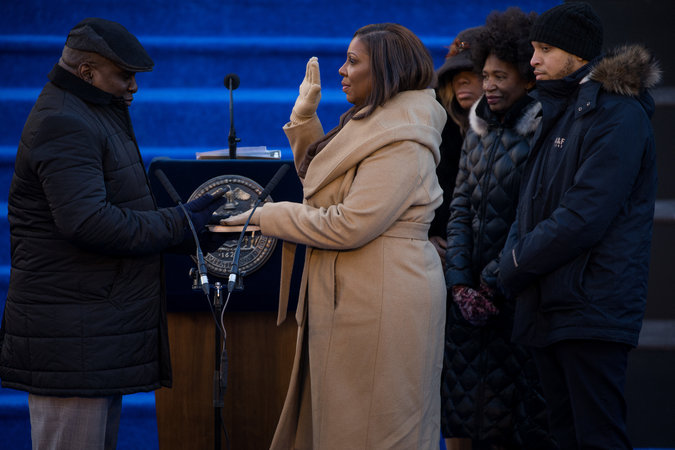 Letitia James was sworn in for a second term as the city’s public advocate. Both Ms. James and Mr. Stringer have been mentioned as potential Democratic candidates for mayor in 2021.

Mr. Stringer and Ms. James are not the only ones in the undeclared competition.

The extended list, at this far-too-early date, also includes officials like the borough presidents of the Bronx and Brooklyn — Ruben Diaz Jr. and Eric Adams — and Deputy Mayor Alicia Glen, who at least one administration official has said would be interested in making a run. (Others have denied that she has any interest.) Each would be out of a job in four years and may be looking for the next high political perch. All three were in attendance on Monday.

Some political observers have also added Corey Johnson, who was also at the ceremony and is beginning his final term as a council member and is expected to be elected speaker of the City Council on Wednesday.

“I think Quinn is in the minds of most electeds looking to 2021,” said Christina Greer, a professor of political science at Fordham University, who attended the inauguration Monday. Christine C. Quinn, the former City Council speaker, was seen as aligned with the policies of Mayor Michael R. Bloomberg, which hurt her Democratic primary bid in 2013. In other words, the mayoral hopefuls will quite likely spend much of the next four years as foils to Mr. de Blasio.

It is a familiar dynamic.

“I guarantee you in the next four years, we’re going to agree on everything!” Mr. de Blasio said sardonically of Ms. James and Mr. Stringer during his inaugural address.

Mr. Stringer, who privately toyed with the idea of mounting a primary challenge to Mr. de Blasio in 2017, begins the competition ahead in the money game. Because he did not accept matching funds for his re-election campaign for comptroller — a race in which he faced no strong competition — he can roll over much of his campaign cash into his 2021 mayoral campaign account, a sum that his aides put at more than $1.3 million.

Mr. Diaz had about $900,000 after his re-election race, though only about $600,000 of it could be rolled over into a campaign account because he took public funds for his campaign that he will have to return, according to a spokesman. So did Ms. James for her largely carefree cruise back to the public advocate’s office; she also has far less in her account — about $39,000 — and the unspent funds would have to be paid back.

But there is a lot of time to make up ground.

“Tish James!” a man at the inauguration, wearing a pair of blankets over his wool coat, yelled out several times, whenever her name came up. He left after Ms. James spoke.

Before the inauguration, several council members in attendance joked that whoever gave the shortest speech would be the early favorite for 2021.

In that, Mr. Stringer, prevailed. While Ms. James’s remarks stretched to 13 minutes, his ended in less than six.