Belt and Road takes its name from the idea that Beijing is spreading its influence along the ancient Silk Road that once linked imperial China to the Roman Empire and to the medieval Europe of Marco Polo. But that was not the only push to extend its presence abroad that Beijing was trying to showcase.

On Friday, the Chinese government used a policy document issued in Beijing to call for a “Polar Silk Road” that would link China to Europe and the Atlantic via a shipping route past the melting Arctic ice cap.

Belt and Road has been a centerpiece of the foreign policy of President Xi Jinping, and his promises of a “China Dream” of restoring his nation to past greatness. Unveiled in Kazakhstan in 2013, Belt and Road started as a plan to revive economic investment and diplomatic links across Central Asia.

The plan gradually extended to include the Mideast, Europe and eastern Africa, with Beijing promising hundreds of billions of dollars of investment in highways, rail lines, ports, power stations and other infrastructure, much of it through loans from Chinese state-owned banks.

Critics have been skeptical, arguing that projects bankrolled through the initiative will bury the recipients in debt and cause environmental damage. The initiative has also been criticized as an easy line of financing for authoritarian regimes. China says its projects will be environmentally and financially sound, and that it does not seek a say in how other countries are governed. 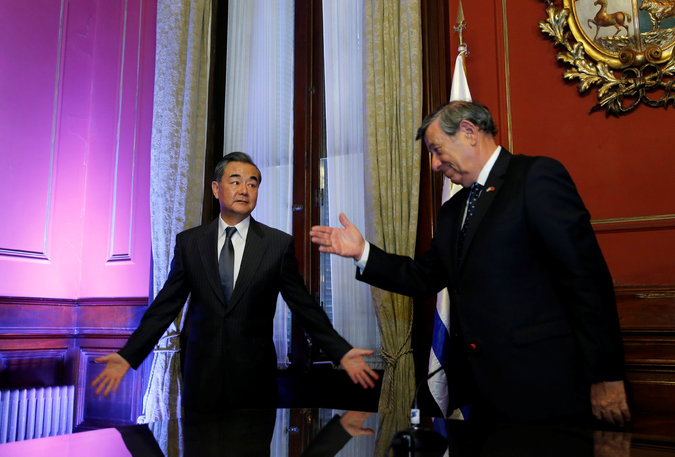 While Davos was underway, China was making other efforts to stretch the geographical ambitions of its Belt and Road initiative even further. At a summit meeting for Latin American and Caribbean foreign ministers in Santiago, Chile, Foreign Minister Wang Yi of China called for close cooperation and participation by the region’s countries, although he stopped short of formally including them in the initiative.

In Davos, President Temer of Brazil said that he was not concerned about the rising influence in South America of China, which has increased investments in his country and extended enormous loans to Venezuela and Ecuador.

Venezuela has already proved unable to repay its creditors, which include Moscow and Beijing. The Russian government has used Venezuela’s overdue debts as a bargaining chip to win the right for Russian warships to visit Venezuelan ports.

Mr. Temer said the debts should be seen as a financial issue, not a geopolitical one. “The major concern they have is to recover the loans they gave Venezuela, they want their payment,” he said in an interview. “This was actually quite explained in the meetings we have.”

He also said that he was not worried by the strong Chinese interest in acquiring stakes in Brazil’s electrical distribution and other industries. “The U.S. invests as well in Brazil,” he said.

National leaders seemed to vie with one another in Davos in calling for closer cooperation with China. Mr. Abbasi of Pakistan dismissed recent controversy in his country over whether China’s giant construction projects were compromising Pakistan’s sovereignty, its environment or its financial stability.

“There is no major challenge we have not been able to resolve, and the sovereignty issues are very clear,” he said at a breakfast for business executives and the news media. He added that on financial and environmental issues relating to Belt and Road projects, “So far, I can tell you we are winning on both counts.”

Chinese officials used Davos as another opportunity to speak out against protectionism, in what analysts have described as an effort to take advantage of global concerns about the Trump administration and its warnings that it would pursue a more aggressive trade policy.

Beijing’s rhetoric comes despite China’s steep tariffs on a broad range of manufactured goods, including shoes and cars. China’s average tariffs on imports are actually triple those of the United States and double those of the European Union.

However, China has zero tariffs on many raw materials that it has in only limited quantities at home, like iron ore. As a result, its stance has been particularly welcomed by countries like Chile that produce a lot of raw materials but relatively few factory goods.

“In this, we see a very big difference with the United States,” Foreign Minister Heraldo Muñoz of Chile said, calling China’s “vision of openness and its rejection of protectionism very welcome.”