There have been some gatherings, but relatively few and poorly attended, a lack of interest that has confounded many residents. To some extent, some say, it may reflect a divide between Iran’s urban and rural populations, with more sophisticated city dwellers dismissing the leaderless provincial protests as too violent and undisciplined.

Others see the chaos and violence in nearby Syria, and worry about what could happen if Iran suffered a similar breakdown in authority. Still others, having gone through the 2009 protests and the brutal repression that finally contained the uprising, say they are willing to work patiently to wring economic and political concessions from the clerical government.

In a series of interviews, Tehran residents said they were just as upset as anyone else over the country’s widespread corruption, high unemployment and lack of freedoms, but most also said they did not know anyone who had joined a protest in recent days.

“Maybe it’s the presence of security forces,” said Farhad, a 33-year cybersecurity expert who refused to give his surname for fear of reprisals by the authorities. “Or maybe Tehranis are just not interested.”

In 2009 they were interested. Millions marched in protest against the state, holding up green ribbons and posters asking, ‘‘Where is my vote?’’ Young people, women and intellectuals were all furious over President Mahmoud Ahmadinejad’s re-election, which they said was fraudulent. Led initially by two defeated opposition presidential candidates, Mir Hossein Mousavi and Mehdi Karroubi, they took to the streets, facing heavily armed security forces.

The protests rocked the Islamic republic to its core. Around 150 people were killed, thousands were arrested, and intellectuals, journalists and politicians were tried in Stalinist-type mass proceedings, many of them forced to make humiliating public confessions of wrongdoing. Two protesters were executed. 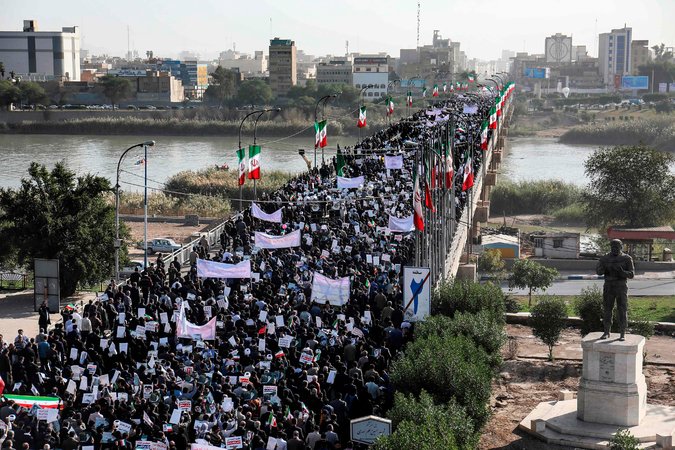 Pro-government demonstrations took place in at least 10 cities, including Ahvaz, the capital of the oil-rich province Khuzestan.

In those days, Ali Sabzevari, now 33, joined every protest. “We were fighting for our rights and our future, but we had structure and a plan,” he said. But this time around, older, a bit heavier and wiser, he said the protests held no attraction for him.

“Those people do not know what they want. They have no clear idea, and I don’t like their slogans,” he said. “I want our society to open up, more democracy, but I don’t see how violent protests will achieve that.”

Others shared that view, and worried about playing into the hands of widely detested Western leaders like President Trump and Israel’s prime minister, Benjamin Netanyahu. “These people definitely have the right to protest,” Shervin Bashari, 32, said of the Iranian demonstrators, “but I do not want to join something and have Trump and Nethanyahu exploit it for their own purposes.”

Mr. Trump has posted several Twitter messages supporting the protesters, saying the United States will come to their aid at the right time.

“I don’t want to support chaos either,” said Mr. Bashari, who sells imported heating equipment. “Protest should be peaceful and with minimal costs. Now 21 people, including two children, have died, and for what?”

The Green Movement and the security clampdown that followed left a deep scar on all those involved. Many protest leaders spent years in jail under harsh conditions, and Tehran endured a heavy police presence.

In 2011, the leaders of the protest — Mr. Moussavi, his wife, Zahra Rahnavard, and Mr. Karroubi — were placed under house arrest without a trial. They have remained there since, and have only recently been allowed to receive selected visitors.

The election of a moderate president, Hassan Rouhani, in 2013, — celebrated with huge street parties in Tehran and other middle-class cities — was seen by many as an end to that period.

The subsequent signing of the nuclear agreement and the lifting of international sanctions was similarly celebrated by educated urbanites, who in many ways set the cultural and social norms in the country.

Many have since grown disillusioned with Mr. Rouhani, even after his re-election this year. He has failed to fulfill election promises like appointing three women as ministers (so far, none have been named), and the nuclear pact has not produced the economic boom he promised. Yet, no matter how sour their feelings about Mr. Rouhani, most reform-minded people in Tehran are sticking by him.

Leili Rashidi, a prominent Iranian actress, is typical of this group. One of the best-known figures to join the 2009 protests, a potentially career-threatening decision, Mrs. Rashidi says she has no interest in joining the current protests.

Having campaigned for Mr. Rouhani’s re-election in May, she says she is not ready to desert him. “He is not perfect,” she said, “but he is the only way forward.”

She said her friends all agreed with her that efforts to overthrow the system would lead nowhere. “I sympathize with the problems of the protesters who want a better standard of living, jobs and less economic hardship,” she said. “But change must come gradually, I’ve learned. With least pain, peacefully, not through violence.